Historical fiction has always been one of my favorite genres and I've been really excited about some of the recently released and upcoming offerings in the genre!  I haven't been reading that much over the summer so I'm excited to dive into a few I've been meaning to get to. Here are three that released this summer that are on my TBR list just waiting for me to get to. 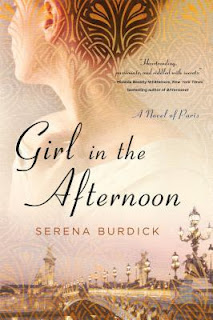 1. Girls In the Afternoon by Serena Burdick: Paris + Belle Epoque era + wealthy family with secrets + art + scandal + reuniting with someone you loved but who had disappeared = YES PLEASE. I will devour this.

"Born into a wealthy Parisian family at the center of Belle Epoque society, 18-year-old Aimée Savaray dreams of becoming a respected painter in the male-dominated art world; and secretly, she also dreams of being loved by Henri, the boy her parents took in as a child and raised alongside her.

But when Henri inexplicably disappears, in the midst of the Franco-Prussian war, the Savarays’ privileged lives begin to unravel. Heartbroken, Aimée tries to find him, but Henri doesn’t want to be found—and only one member of the family knows why.

As Aimée seeks refuge in the art world, mentored by the Impressionist Édouard Manet, she unwittingly finds her way back to Henri. With so many years gone by and secrets buried, their eventual reunion unmasks the lies that once held the family together, but now threaten to tear them apart." 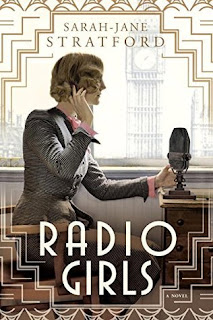 2. Radio Girls by Sarah-Jane Stratford: I love reading about badass women who pioneer the way for other women and this book is about a (fictional) character who finds a job as a secretary at the newly formed British Broadcasting Company in 1926 and ends up working closely with Hilda Matheson, who was a very real person and director/#ladyboss of the time at the BBC, who together unearth a shocking conspiracy that they know MUST be heard and could have dire consequences.

"The Great War is over, and change is in the air, in this novel that brings to life the exciting days of early British radio…and one woman who finds her voice while working alongside the brilliant women and men of the BBC.

London, 1926. American-raised Maisie Musgrave is thrilled to land a job as a secretary at the upstart British Broadcasting Corporation, whose use of radio—still new, strange, and electrifying—is captivating the nation. But the hectic pace, smart young staff, and intimidating bosses only add to Maisie’s insecurity.

Soon, she is seduced by the work—gaining confidence as she arranges broadcasts by the most famous writers, scientists, and politicians in Britain. She is also caught up in a growing conflict between her two bosses, John Reith, the formidable Director-General of the BBC, and Hilda Matheson, the extraordinary director of the hugely popular Talks programming, who each have very different visions of what radio should be. Under Hilda’s tutelage, Maisie discovers her talent, passion, and ambition. But when she unearths a shocking conspiracy, she and Hilda join forces to make their voices heard both on and off the air…and then face the dangerous consequences of telling the truth for a living." 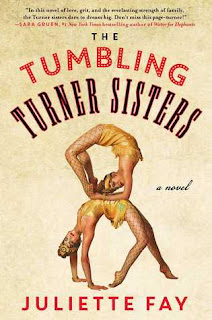 3. The Tumbling Turner Sisters by Juliette Fay: When their father is unable to work after a work injury, four sisters embark on the adventure of a life time to work and provide for their family on the vaudeville stage as acrobatic performers. Love a good sister book plus any book that takes place in a circus or performing type setting is a go in my book!

"In 1919, the Turner sisters and their parents are barely scraping by. Their father is a low-paid boot-stitcher in Johnson City, New York, and the family is always one paycheck away from eviction. When their father’s hand is crushed and he can no longer work, their irrepressible mother decides that the vaudeville stage is their best—and only—chance for survival.

Traveling by train from town to town, teenagers Gert, Winnie, and Kit, and recent widow Nell soon find a new kind of freedom in the company of performers who are as diverse as their acts. There is a seamier side to the business, however, and the young women face dangers and turns of fate they never could have anticipated. Heartwarming and surprising, The Tumbling Turner Sisters is ultimately a story of awakening—to unexpected possibilities, to love and heartbreak, and to the dawn of a new American era."


Are there any recent historical releases you plan to read or that you have read that should be on my radar?