Back in November, I moved in with my boyfriend.  This entailed moving an hour away, to a town that I had been going to all my life because my grandparents lived there.  I had long romanticized the little town and wanted so badly to move there and become a part of the daily life.  Couldn't explain why if I had to.  It's been the inspiration of a few stories that I've had running through my head, formulating themselves, for ages.  Basically, I love it here.

Ever since I started law school, I have truly been living the "broke" part of our title.  And, fortunately, since about the end of the semester, the "bookish" part has come back to me as well.  We don't have a real book store up here.  The closest one is a good hour away.  But that doesn't matter because I am broke.  :)

I decided a while ago that I wanted to get a library card.  I figured that 1. it would help me be more a part of the town and 2. it would be a cheap way for me to get access to new to me books.

Somewhere around high school, I figured that I really sucked at libraries because you have just two weeks to read the book and return it (they didn't have online renewal yet), so I just gave up on libraries as a viable option for me.  But, now that we've got online renewal, I can check out a book for quite a while and hopefully get to it in time, and my need is surpassing my former attitude.

I was still on the fence about it until last week at the pool.  One of the ladies there asked what I was reading, showed me what she was reading, and said she got it at the library on a whim.  Internally, I was like, "I'd like to get books on a whim and not risk getting burned!"  A couple of days later she described the book and it sounded amazing!  A quick look at my bank account made me realize that I couldn't buy my own copy even if we had a book store in town.  That really kind of settled it for me--I needed to get a library card asap.

Yesterday I had some time to kill before the pool opened, so I took the plunge.  I grabbed a utility bill that was in my name and headed downtown, on a mission.  As I drove, I couldn't help being pretty excited--I was getting a library card--I was becoming a real citizen here.  It all just felt big.  I'm sure someone, probably even several someones, reading this post will understand what I mean.

I filled out the form.

Then they handed me this: 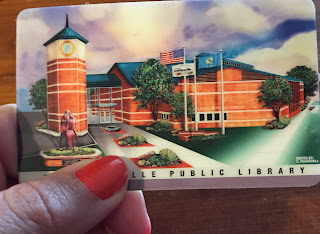 Yay!  It wasn't quite the Harry Potter getting a wand moment, but it was maybe a little close since the AC kicked on and a slight breeze blew my hair back.

After getting the card, I looked around for the book.  My pool friend still had it checked out.  So I wandered around a little bit.  I almost picked up a huge annotated Adventures of Huckleberry Finn, but it's sheer size kept me from wanting to take it to the pool (I definitely filed it away for later).  Randomly, I picked up and checked out Galapagos by Kurt Vonnegut--started it at the pool, and so far so good.

I also put a hold on the book my pool friend has so as soon as she returns it, that sucker is mine!  At least for a week.

I'm even looking at the two week limit as a challenge as opposed to a restriction.

As much as libraries have stayed the same since I was a kid, they've also changed a lot!  For the past nine years, the only libraries I've been in have been on college campuses.  They have all of the latest technology and, in many ways, are more about creating a research-friendly environment as opposed to fulfilling a civic service.  This library had plenty of technology for the community, which is great, but they were definitely still book-centered.  And the summer reading program.  I wish there was one for grown-ups.

But my favorite thing is that now they'll send you texts when your books are due or when holds come in.  Awesome!
Posted by Unknown at 10:20:00 AM