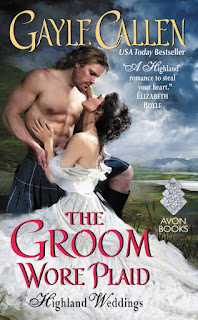 Title/Author: The Groom Wore Plaid by Gayle Callen
Publisher/Year Published: Feb 23, 2016 by Avon
How I got this book: I received a review copy from the publisher in exchange for an honest review.
Why I read this book: I love historical romances and I haven't read one in Scotland in a while!
Rating: 4.5 stars

Maggie McCallum’s dreams about her new fiancé aren’t the romantic sort. It’s not just that she was bartered to Owen Duff like a piece of property to end a clan feud. She’s also haunted by premonitions of his death on their upcoming wedding day. Yet the exasperating Highlander won’t let her call it off, even though his life and his clan are both in jeopardy. Owen has wanted Maggie in his bed since he first glimpsed her years ago. If their union restores peace between their clans, so much the better. But while lusting after another chief’s sister had its risks, growing to trust Maggie is far more dangerous. Owen is falling deeply in love with the one woman he cannot hope to claim…and survive.

Review:
It's been quite some time since I have had the chance to read a romance set in Scotland. Going into this book, I had no idea that it was the second in a series, but that didn't effect my enjoyment. We meet Maggie as she is arriving at her future husband's home for the first time. We follow Owen and Maggie through flashbacks of how they first met and their past together before this new development. And the new development is an old contract that is forcing their hand into marriage. Neither of them really mind, until Maggie has a dream that she is convinced is an omen and spends the rest of the book trying to break off the marriage lest what she dreams comes to pass.

My favorite part of this book are the characters, and it is primarily a character driven book. Maggie is trying to fit in a new family (who has hated her clan for years) and Owen is trying to step out of the shadow of his dead father, who was a horrible leader. Their romance is so cute and was my favorite thing to read. The sexytimes were also pretty nice to read, too. On a scale of bland to ghost pepper, the heat of the scenes was sort of in the middle.

I do think that the plot was the weakest part of this book. It focused too much on Maggie's dream to further the plot. I thought there could have been enough to focus on with the moving to a new place with a sort of Romeo and Juliet sort of family feud without adding the dreams into a mix. But even so I still enjoyed the book enough to glomp through it in one plane ride.

Giveaway!!
If you are interested in reading some historical romance set in Scotland I would definitely recommend you check this out and excitingly, Avon has given us a review copy as part of their book tour! Not only that but the first book in the series The Wrong Bride is included for the three lucky winners! The book officially comes out tomorrow but here is your chance to win your own copy!

Thanks again to HarperCollins and Avon for the chance to read this one early and for the giveaway!!