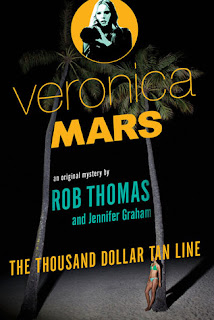 Book: Thousand-Dollar Tan Line
Author: Rob Thomas and Jennifer Graham
Why I read it: As a Marshmallow I couldn't resist!
Rating: 5 stars

“Ten years after graduating from high school in Neptune, California, Veronica Mars is back in the land of sun, sand, crime, and corruption. She's traded in her law degree for her old private investigating license, struggling to keep Mars Investigations afloat on the scant cash earned by catching cheating spouses until she can score her first big case.

Now it's spring break, and college students descend on Neptune, transforming the beaches and boardwalks into a frenzied, week-long rave. When a girl disappears from a party, Veronica is called in to investigate. But this is not a simple missing person's case. The house the girl vanished from belongs to a man with serious criminal ties, and soon Veronica is plunged into a dangerous underworld of drugs and organized crime. And when a major break in the investigation has a shocking connection to Veronica's past, the case hits closer to home than she ever imagined.”

As a proud Marshmallow, I eagerly downloaded the audio book for this, especially after I learned that it was narrated by VMars herself, Kristen Bell.

It was everything I could have hoped for! (Well, minus ONE thing. I could have used a bit more of a certain character… ;) ) It has the sass, the mystery, the genius, the laughter and tension of the TV series and movie. It was so fun to be back with these characters! Every time a familiar character entered the scene it was like a reunion for me. Old favorites back together again. All of the references and inside jokes! It kept me on my toes and challenged my Veronica Mars trivia! I was weirdly pleased every time I made the connection and remembered the right facts and details.

The mystery itself kept me guessing throughout the story. I’d start to suspect someone, then change my mind. Then I’d start wavering again. The “who done it” was pretty surprising, and I was so pleased that I was actually surprised, that doesn’t happen all that often! I did guess a few of the twists.

Overall, it was a great story. Made even better by Kristen Bell’s narration. If you haven’t watched the series, you’d probably be very very lost. I also recommend the audio over print. I’ve been told that the style of writing is a bit too script-like, which makes for a great audio book.

Now... Where are my fellow Marshmallows???