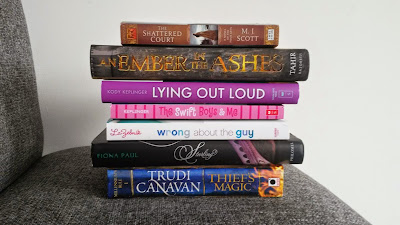 Bought:
-The Shattered Court by M.J. Scott: SO excited! It sounds like an epic new fantasy series :)
-An Ember in the Ashes by Sabaa Tahir: so I've heard mixed things about this one, but I still really want to read it. Also, it's so pretty!
-Lying Out Loud by Kody Keplinger: it's a companion novel to The DUFF. I could never not order this.
-The Swift Boys and Me by Kody Keplinger: I've heard from a reliable source that this is adorable, so --> insta-buy.
-Wrong About The Guy by Claire LaZebnik: I really like Claire LaZebnik's writing, it's cute and fluffy and just generally nice reads. And it's a retelling of Emma. Obviously this needs to be read.
-Starling by Fiona Paul: I heard the hardcovers were going out of print and I have the first two in hardcover so I needed this one, even though they changed the covers and it doesn't really match the other two...
-Thief's Magic by Trudi Canavan: I cannot help myself when it comes to anything that sounds like interesting fantasy series.

Egalleys for review:
-The Fixer by Jennifer Lynn Barnes: I never thought I'd get approved for this one, but I did and SO MUCH EXCITEMENT!! I love Jennifer Lynn Barnes' writing and this sounds awesome.
-Anne & Henry by Dawn Ius: a retelling of the Anne Boleyn and Henry VIII's story! I AM SO IN! And I've heard amazing things about it already, so extra excitement :)
-The Immortal Heights by Sherry Thomas: OMG ALL THE EXCITEMENT!!! *hugs ereader really close* This series! I just want to reread the other two books before diving into this!
-Ice Like Fire by Sara Raasch: Yay! I really enjoyed Snow Like Ashes, so I'm dying to get my hands on the sequel!
-Legacy of Kings by Eleanor Herman: like I mentioned before: I cannot help myself when it comes to interesting sounding new fantasy series!
-All the Ways To Ruin a Rogue by Sophie Jordan; Sophie Jordan's historical romance novels are amazing and I will forever read all of them. 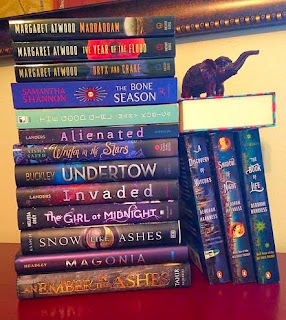