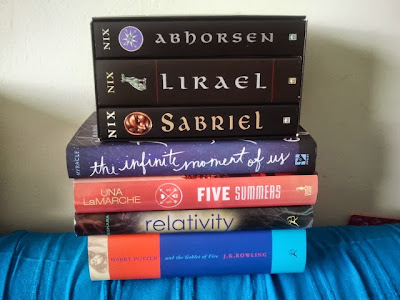 Birthday Books!
Like I said last time, I'm a lucky girl and have wonderful people in my life who buy me books for my birthday :) My mom got me these:
-Sabriel by Garth Nix
Lirael by Garth Nix
Abhorsen by Garth Nix: the beautiful boxed set of The Abhoren Trilogy! I'm so excited!! People keep telling me how amazing this series is :D
-The Infinite Moment of Us by Lauren Myracle: I've heard a lot of good things about Lauren Myracle's Shine and this sounded like it could be my kind of book!
-Five Summers by Una LaMarche: because seriously, I love books about friendships. Even if they're falling apart, because that's life and not every friendship lasts forever. Also: SUMMER CAMP! EEE!
-Relativity by Cristin Bishara: because look at the gorgeous cover!! And I'm fascinted by alternate realities!
-Harry Potter and the Goblet of Fire by J.K. Rowling: I owned the whole series in English, except for this one and now I can blisfully stare at my beautiful complete set! :D

You're probably not reading this, but thank you so much mom!!

Bought:
-The House of Hades by Rick Riordan: YAY PERCY JACKSON!! I really need to start this series... But I'm trying to re-read Percy Jackson first...
-Premeditated by Josin L. McQuein: VENGEANCE YES!
-Tandem by Anna Jarzab: PARALLEL WORLDS OMG YES! SO EXCITED!
-The Mark of Athena by Percy Jackson: see also excitement about The House of Hades
-Romancing Mister Bridgerton by Julia Quinn: I'm slowly making my way through Julia Quinn's backlist :) It is awesome!
-Unbreakable by Kami Garcia: Ancient. Secret. Society. That's all.
-A Radiant Sky by Jocelyn Davies: I started this series way back when the first book was released and have yet to find the time to actually continue with it. But I want to!!
-De Laatste Zomer by Tatiana de Rosnay: Dutch version of A Secret Kept, I keep hearing amazing things about her books and it was a total bargain!
-The Enchanter Heir by Cinda Williams Chima: so I haven't started this series yet, but I LOVED her Seven Realms series and obviously I needed to own this. And it is SO PRETTY!
-Perfect Ruin by Lauren DeStefano: I loved Wither! And this new series sounds really exciting :)
-Steelheart by Brandon Sanderson: because it is YA by Brandon Sanderson!! How could I resist this??
-Ten by Gretchen McNeil: this sounds insanely creepy! And I like to creep myself out every now and then :) 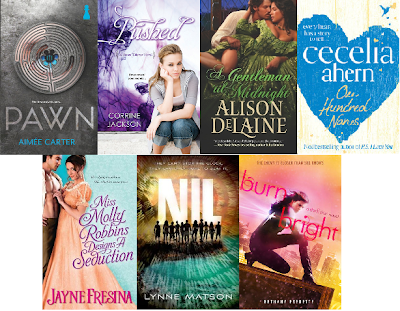 Ebooks for Review:
-Pawn by Aimee Carter: I totally loved her Goddess Test trilogy and am so excited about this new series!!
-Pushed by Corrine Jackson: I haven't read the first book yet, but I do own it and this sounds like an interesting series! I'm not really loving the new cover design though.
-A Gentleman 'Til Midnight by Alison DeLaine: A LADY CAPTAIN! YES!
-One Hundred Names by Cecelia Ahern: her books are a bit hit or miss for me, but this sounds like it has a lot of potential!
-Miss Molly Robbins Designs a Seduction by Jayne Fresina: scandalous business arrangements! Yes!
-Nil by Lynne Matson: OMG! SO MUCH EXCITEMENT!! :D
-Burn Bright by Bethany Frenette: I really need to read the first book, this series sounds so good!

I have received quite a few books over the last month, so I'm just going to highlight the ones I am SO EXCITED about! I'm sorry, but I don't have time to link to Goodreads like Daisy did! 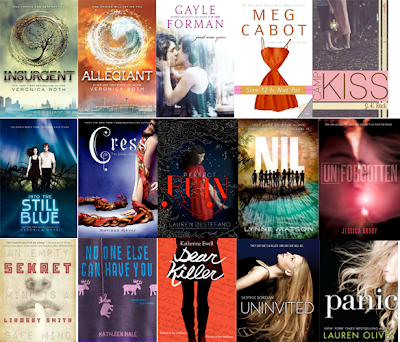 Bought:
Insurgent by Veronica Roth
Allegiant by Veronica Roth (Pre-order)
Just one Year by Gayle Forman (I got a pre-order for my birthday in June, and it came!)
Size 12 is Not Fat by Meg Cabot
Camp Kiss by J.K. Rock

eARCs for review:
Into the Still Blue by Veronica Rossi (It was AMAZING)
No One Else Can Have You by Kathleen Hale
Dear Killer by Katherine Ewell
Uninvited by Sophie Jordan
Panic by Lauren Oliver

Finished copy from publisher as a thanks for my review:
Perfect Ruin by Lauren DeStefano (AMAZING book, people.)


Our Broke & Bookish book haul is inspired by memes like IMM & Stacking the Shelves & Mailbox Monday. This is just our very simple way of doing it collaboratively so we can participate in all of them and not have to choose one.
Posted by Daisy at 12:00:00 PM