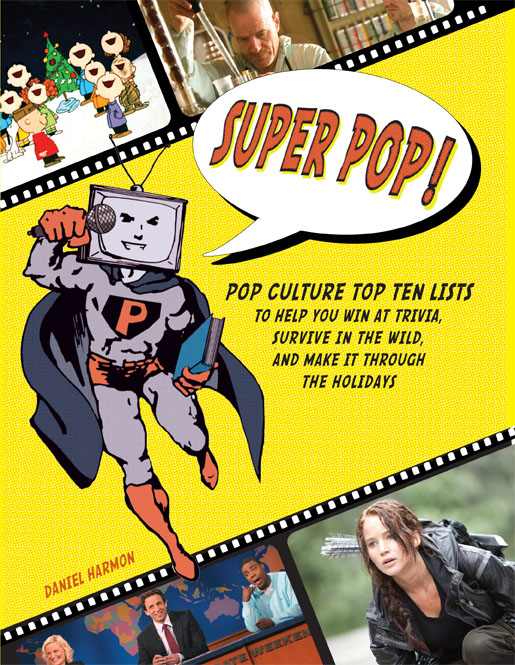 Title: Super Pop!: Pop Culture Top Ten Lists to Help You Win at Trivia, Survive in the Wild, and Make It Through the Holidays
Author: Daniel Harmon
Publisher: Zest Books, 2013

Tahleen here! Here at The Broke and the Bookish, you know we like top ten lists. This book fits right in with our penchant for listing, and adds a large dollop of humor at that. Well, more than a dollop I guess. It was pretty hilarious all the way through.

Daniel Harmon goes through five parts in his compendium, which include "Be More Interesting," "Get Smart(er), "Stop Doing It Wrong," "Find Happiness," and "Survive the Holidays." In each section he has a wealth of pop culture information in the form of lists, all listed in no particular order. He goes really into detail too, with very specific lists like "Sleep With the Fishes: The Ten Best Places to Find Your Spirit Animal" and "Drink the Kool-Aid: Touchstones for Quirky, Like-Minded People." Harmon proves himself to be a pretty quirky and incredibly knowledgeable guy himself, though he admits in the intro that he hasn't seen/read/listened to/etc all of the items he talks about.

What really impressed me was how carefully he chose which form of a story to place on each list, be it in its original novel form, its movie form, or television form. He has concrete reasons for each item he chooses.

On the other hand, I'm not really sure this is a great book for teens, just because there is so much on that list that they might not have seen yet. Granted, I work with tweens mostly, so what do I know, but I personally didn't know many of the items because they were before my time—I can imagine it would be the same for those younger than me. Ultimately I would say this is probably a fantastic book for 20-somethings, and a pretty good choice for some, but not all, teens. Thankfully, there are many recent items as well as throwbacks, so it balances out pretty well in the end. Plus, he talks about some YA books! (Though I disagreed with his observations of 13 Reasons Why by Jay Asher—calling a book about morals made me want to gag a little, even if it's kind of true.)

I think the best thing about this book is you can leave it anywhere in your house and someone will probably pick it up and read it when they're bored. It's got pretty much everything. Great for the coffee table! (Or bathroom, but I didn't say it.)

In the spirit of Super Pop!, I've created my own top ten list!

Top Ten Movies for Kids Who Grew Up in the '90s

1. Heavyweights, because it is hilarious and is so incredibly quotable. Plus, Judd Apatow was a writer.

2. Troop Beverly Hills, though this was made in the late '80s and I am probably one of the few people who actually own a DVD copy of this today.

3. Beethoven, because who doesn't love a giant, slobbery St. Bernard with a heart of gold?

5. The Sandlot, FOR-EV-VER. The best baseball movie ever. Maybe. Definitely.

6. The Little Giants, since we're talking about sports movies. Don't tell me Devon Sawa wasn't adorable, and Becky the Icebox could totally kick your ass. Who doesn't love an underdog story?

7. Jurassic Park, because this was like the first PG-13 movie I saw and it was SCARY. And AWESOME. And it's still awesome today, 20 years later. I just showed this to my tweens at the library and they loved it. Dinosaurs, man.

8. Any Adam Sandler movie, even though we were probably not really allowed to watch it. I'm pretty sure every one I saw in the '90s was at a friends house or while my parents weren't paying close enough attention. Like, Billy Madison was definitely something my mom probably would never have let me watch. (Thanks Joanne and Joanne's mom!)

9. Home Alone, because everyone knew Macauly Culkin didn't like that aftershave but no one knew why. Also, now we know what to do if we have intruders in our home. (Obviously only wimps call the cops immediately.)

You should totally check out the other stops on the Super Pop! blog tour.

Want to win a signed copy for yourself or a friend? Enter here!


a Rafflecopter giveaway
Posted by Tahleen at 12:30:00 AM