Kimberly ventures into the drama that is Game of Thrones 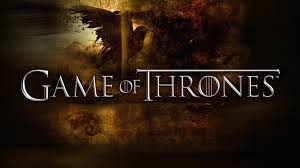 I realize that just about everyone and their dog has read or watched Game of Thrones. They chat on twitter about characters that I've never heard of. I see video after video that fans have edited and put on YouTube. My own Aunt has read the series. I'm the reader in the family. I'm usually the one who has conversations like this...

So when I was camping a couple of weeks ago and my aunt started talking about the series, I realized I needed to get my butt into gear and start reading the series again. I read the first one about a year ago and never picked up the second one. Now I'm almost done with A Clash of Kings. I'd forgotten how much his writing sucks you in.

I'm also preparing myself for the inevitable emotional torture that I'll experience reading these. Luckily, a few of my friends including some of the other lovely B&B bloggers, have read them and listen to me freak out or get excited when a character I've only heard about makes their entrance. Mainly it is Kelly and Daisy that get to hear about it. (Thanks ladies!)

So, who else out there has read the series? (possibly a dumb question) Anyone else just getting started with the series?