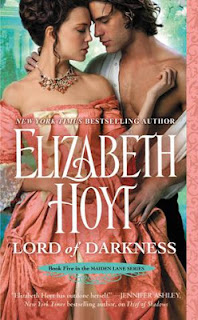 Title/Author: Lord of Darkness by Elizabeth Hoyt
Publisher/Year Published: February 26th 2013 by Forever Romance
How I got this book: NetGalley in exchange for a fair review
Why I read this book: The fifth book in a historical romance series set in 1730s London.
Rating: 4.5 stars

Elizabeth Hoyt’s Maiden Lane Series is the first series that I can remember reading that really made me think that I could read books set in historical London not mainly set in the ton. This series is one of my favorites out there right now. I eagerly lap up every installment. In fact, I started this series because of The Broke and the Bookish with my first provided by the publisher review of Wicked Intentions. Oh, memories.
That said, Lord of Darkness didn’t win me over as some of the prior four books have. Let’s take a look at Lord of Darkness.
The Story
Lord of Darkness is the fifth book in the continuing Maiden Lane series, set in 1730s St. Giles where gin and poverty rule the streets. Two years have passed since the end of the last book, Thief of Shadows.
With that, our book starts off with Margaret, sister to the hero of book two, at a standoff with her husband, Godric. She doesn’t know it’s her husband of course since he is dressed in his Ghost of St. Giles costume, so she thinks she is facing down her lover’s murderer. Yes. That is just the first scene.

Megs is on her way back to live with Godric and make their marriage a true one. Well, really she just wants a baby. Godric has been celibate since his very much loved wife died some years prior, and the two have lived apart since their wedding two years prior.
Anyway, Megs moves into Godric’s sad looking house with his sister and her aunt (and her aunt’s pregnant dog). He kind of just goes with it though is quite put out. They quickly get to the point of her visit and come to a deal regarding the process. Once she is with child she goes back to the country and leaves him alone again.
There is a side story that continues from Thief of Shadows with sweatshops and lace making. Also, they are looking for the murderer of Roger, Megs lover that died.
So there is quite a lot going on. The best parts of the story I thought centered on the characters growing and moving on from the past in their relationship with each other. The saving girls from lace making seemed a little old hat to me as it was the plot of the last book. I sometimes felt the same way with the Ghost having to give up his life for his wife… and from what it looks like the next book may be something similar. I am a bit sick of that story line. But I wasn’t sick of these super original characters and their conflict.
The Characters
Godric and Margaret are very complex characters. Godric married for love and then watched his love died from a drawn out disease vowing to never love again and throwing himself into his life as the Ghost. Margaret went from being the cute capricious younger sister of Griffin in book two to the distraught woman whose love died before their life had a chance to start. She is the one ready for a change, even if it is just having a baby of her own.
Watching the internal struggles of these two as they try to come to grips with their new life together and the feeling of betraying their previous loves is fascinating. Rarely do we get to see romantic leads having to deal with such heavy stuff. Godric has the additional complexity of trying to fit in with his step-mother and half-sisters, who also end up descending on his home. At the end of the book I liked where they ended up as characters.
The Romance
The romance was definitely interesting as it started off so uncomfortably as they were in bed with two ghosts of former loves. Watching it develop was painful at times, but still. Where they ended up was believable. The problem for me was I couldn’t connect to these two as strongly as I have as some of the others in this series. I am not sure why that was. I’ve never had a former lover to the extent that these have lost, so maybe my empathy meter was broken. I could appreciate them and their growing love, but I just couldn’t be overwhelmed by them and throw myself into their story. Maybe I didn’t want to feel what they were feeling so I separated myself, who knows. However, I also think this is more of a user error then the author not being able to write relatable characters, which is hardly the case.
The Execution
Elizabeth Hoyt is one of my favorite historical romance authors out there right now. She writes brilliant characters with scenes that live so well in my imagination that I could just step right in. My only negative in that I feel slightly as if this story with the Ghost has been done before in just her last book. Is it more of a continuation of the plot, maybe? I don’t know. It seemed more of the same to me. I am worried the next book may feel that way too, but I won’t make that judgment until I read it.
The Overview
Overall I really liked the characters in this book, even though I couldn’t connect to them as well as some previous ones. Though I thought the St. Giles plot may be repetitive, the story is still captivating and enthralling. I would definitely recommend it to fans of the series and Hoyt. I think it could potentially be read on its own, but would do better to be read in the series.
The Maiden Lane Series consists of the following: Wicked Intentions, Notorious Pleasures, Scandalous Desires, Thief of Shadows and Lord of Darkness.
This book was provided for me free for an honest review from NetGalley.
Posted by Julia at 12:30:00 AM