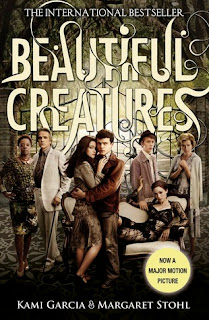 Lena Duchannes is unlike anyone the small Southern town of Gatlin has ever seen, and she's struggling to conceal her power, and a curse that has haunted her family for generations. But even within the overgrown gardens, murky swamps and crumbling graveyards of the forgotten South, a secret cannot stay hidden forever.

Ethan Wate, who has been counting the months until he can escape from Gatlin, is haunted by dreams of a beautiful girl he has never met. When Lena moves into the town's oldest and most infamous plantation, Ethan is inexplicably drawn to her and determined to uncover the connection between them.

In a town with no surprises, one secret could change everything. 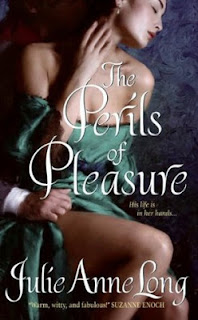 
Scandal has rocked the city of London. Colin Eversea, a handsome, reckless unapologetic rogue is sentenced to hang for murder and, inconveniently for him, the only witness to the crime disappears. Then again, throughout history, the Everseas have always managed to cheat fate in style: Colin is snatched from the gallows by a beautiful, clever mercenary.

Cool-headed, daring Madeleine Greenway is immune to Colin's vaunted charm. Her mission is not to rescue Colin but to kidnap him, and to be paid handsomely for it. But when it becomes clear that whoever wants Colin alive wants Madeline dead, the two become uneasy allies in a deadly race for truth. Together, they'll face great danger—and a passion neither can resist

This is the first in the Pennyroyal Green series, which Daisy and I have reviewed almost all of them...so they come highly recommended. Here is my review of this book. 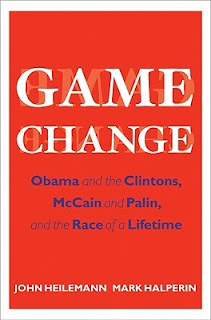 
In 2008, the presidential election became blockbuster entertainment. Everyone was watching as the race for the White House unfolded like something from the realm of fiction. The meteoric rise and historic triumph of Barack Obama. The shocking fall of the House of Clinton--and the improbable resurrection of Hillary as Obama's partner and America's face to the world. The mercurial performance of John McCain and the mesmerizing emergence of Sarah Palin. But despite the wall-to-wall media coverage of this spellbinding drama, remarkably little of the real story behind the headlines has yet been told.

In "Game Change," John Heilemann and Mark Halperin, two of the country's leading political reporters, use their unrivaled access to pull back the curtain on the Obama, Clinton, McCain, and Palin campaigns. How did Obama convince himself that, despite the thinness of his resume, he could somehow beat the odds to become the nation's first African American president? How did the tumultuous relationship between the Clintons shape--and warp--Hillary's supposedly unstoppable bid? What was behind her husband's furious outbursts and devastating political miscalculations? Why did McCain make the novice governor of Alaska his running mate? And was Palin merely painfully out of her depth--or troubled in more serious ways?

Based on hundreds of interviews with the people who lived the story, "Game Change" is a reportorial tour de force that reads like a fast-paced novel. Character driven and dialogue rich, replete with extravagantly detailed scenes, this is the occasionally shocking, often hilarious, ultimately definitive account of the campaign of a lifetime.

I believe this is the book that the HBO special that won some Golden Globes. 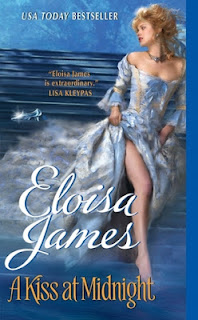 
Miss Kate Daltry doesn't believe in fairy tales . . . or happily ever after.

Forced by her stepmother to attend a ball, Kate meets a prince . . . and decides he's anything but charming. A clash of wits and wills ensues, but they both know their irresistible attraction will lead nowhere. For Gabriel is promised to another woman—a princess whose hand in marriage will fulfill his ruthless ambitions.

Gabriel likes his fiancée, which is a welcome turn of events, but he doesn't love her. Obviously, he should be wooing his bride-to-be, not the witty, impoverished beauty who refuses to fawn over him.

Godmothers and glass slippers notwithstanding, this is one fairy tale in which destiny conspires to destroy any chance that Kate and Gabriel might have a happily ever after.

Unless a prince throws away everything that makes him noble . . .

Unless a dowry of an unruly heart trumps a fortune . . .

Unless one kiss at the stroke of midnight changes everything.