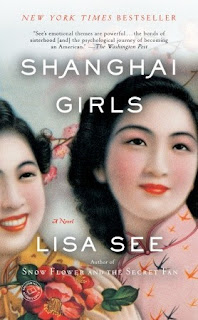 Shanghai Girls is a short and easy book to read, yet is is so beautiful, cultural, and deeply human. It tells the story of Pearl and May, sisters in 1937 Shanghai (also known as the Paris of Asia). They are young, beautiful, privileged, work as models, and are engaged to wealthy business heirs. In short, their lives are perfect. This abruptly ends with their father's financial demise and the outbreak of WWII. Their homes and lives are completely destroyed. They endure the worst sorts of heartbreak as they make a dangerous escape to America and try to find their fiancees.

Once in California, they are held on Angel Island for months where they wan and are on the brink of starvation and mental breakdowns. When they are finally released, they make their way into their new lives. The rest of the book follows them for the next 25 years. We meet their fiancees and new families, learn about their adjustments to living in America (in a time with much prejudice towards Asians) and watch as they face their new identity struggles.

I loved the sisters' relationship. Even though they were complete opposites and often did not get along, they were very devoted and protective of each other. Well into their 40s and 50s they wouldn't leave each other's sides. They clung to each other because they were all they had left of China, their parents, and their old lives. Pearl and May perfectly complimented each other and it was great to read about the different paths they took in their new lives in America.

I can't wait to read Lisa See's other book, The Snow Flower & the Secret Fan, if I know it'll be half as good as this one! I also discovered that a sequel to this book recently came out, focusing on Pearl's daughter, Joy.  I'll have to pick it up soon!