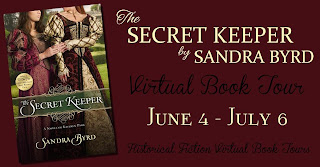 It's hard to find a historical fiction book that I don't like, but, truthfully, my initial thought going into this book was "Oh God, ANOTHER book about one of Henry VIII's wives." The Secret Keeper needs to be a wonderful standout in the mass seas of Tudor books that are out there...and boy, it is.

The book focuses on Juliana St. John who serves in the household of Katherine Parr (her name is spelled Kateryn in the book, but somehow I can't bring myself to write it that way). Juliana is a 'seer' who foresees climatic events in Katherine's life, making Juliana that much more protective of and devoted to her. We follow Katherine through her years as queen, the time after Henry VIII's death, and beyond.

This book follows a lot of common stereotypes found in historical fiction: a fictional character (often who has some spiritual/mythical power) finds herself in the service of a queen (or future queen), quickly becomes a favorite, then steers her lady (who has absolutely no flaws) through the storm, all the while juggling advances from her own dashing suitors. The Secret Keeper is no different in this form, yet manages to still be unique, fund, and fresh. While I liked reading about Juliana, Katherine, and the other ladies-in-waiting, who were all wonderfully written, the 'villain' Anne Stanhope, and Thomas Seymour, who is a bit of a scumbag, were much more interesting to reading about. Sandra Byrd has a great way of writing both sympathetic and detestable characters, which is respectable. Everyone was strong and memorable in their own way.

I also liked the theory that was offered up on what happened to Katherine's daughter. Historically, a toddler Mary just simply disappeared from record books, strange for the daughter of a former queen. There has always been questions as to whether she died, went abroad, or married a low-born. Here, were are given a speculation that actually makes sense given the circumstances that you would read about.

As said before, The Secret Keeper has the ability to really have it's own presence in the historical fiction world. I'm excited to get my hands on Sandra Byrd's other novel about Anne Boleyn!
Posted by Kelly A. at 12:30:00 AM