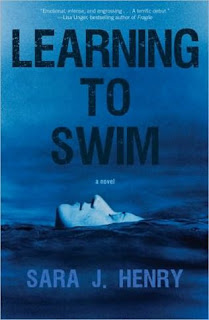 Title and Author: Learning to Swim: A Novel

, by Sara J. Henry
Publishing Info: Crown Publishers; February 22, 2011
How I Got this Book: Crown Publishers sent it to me in exchange for an honest review. My opinions in no way reflect their opinions, nor was I swayed in any direction.
Why I Read this Book: I enjoy mysteries and trying to figure out how everything works out.
Stars: 4.5
It’s been quite a while since I’ve been able to read a good mystery. The first author I ever loved was Mary Higgins-Clark. Her mysteries made me fall in love with the genre, and I’ve been seeking out good ones ever since. When this book popped up in an e-mail to TB&TB, I jumped at the chance to read it. It sounded so intriguing, and exciting. Picture this… you’re on a ferry, it’s crispy cold outside, and in the distance you see a bundle thrown off the back of another ferry at the exact moment you pass it. It could have been trash, right? Or a hoodie that blew off the deck. But no, you just can’t shake the feeling that it is so much worse than that. Without thinking you, not even a very good swimmer, jump into the frigid Lake Champlain and make a beeline for the diminishing ripples in the water where the mysterious bundle hit moments before. As you frantically search the murky waters around you, your eyes meet the eyes of a scared, drowning little boy. You grab him, swim a grueling one-mile swim, hoping to avoid the hypothermia creeping into your very bones, and pull him to the rocky shore. He’s not breathing, so you try to remember the CPR lesson you had a LONG time ago. You succeed. He’s breathing. As his eyes open, he looks at you, lets out a little sigh, rests his sleepy head on your arm, and murmurs, “Merci.”
This is what happens to small town newspaper journalist, Troy, on the way to visit her boyfriend. She scoops the little French-speaking guy up, runs to her car, warms him up, and tries to push away the fact that someone tried to murder this little boy. Using her very limited education in French, she learns from him that his name is Paul, he’s 6, he was kidnapped, and they killed his mom. Rather than turning him over to the police, she assumes the role of temporary mother and takes him home with her. As she learns more about him, she begins to search for his father, investigate the horrible kidnapping on her own, and finds a special place in her heart for him. The more searching she does, the more dangerous her simple life in Lake Placid becomes. She can’t let go, though. She has to know that Paul is safe, and she will do anything in her power to ensure he is.
OH MAN, right? I was hooked from the first line, “If I’d blinked, I would have missed it.” It totally sucked me in, and I read the entire thing on the way home from vacation. I really do love long car rides sometimes. No obligations but reading. The story was so unique. A six-year-old is not usually the most important character in a book, but Paul was definitely the star. He is incredibly sweet, impeccably well behaved, and cute as a button. I fell in love with this little guy, so I can totally understand why Troy did too. And yes, her name is Troy. It threw me for a while, but then I got used to it.
I really like Troy. She lives in Lake Placid with several men that rent rooms from her during high season. She’s one of the guys, but in a feminine way. They respect her, and she’s kind of like a mom to them even though they’re about her age. She has a brother who is a police officer in Florida, and she calls on him when she needs help. I loved reading about the process she went through to dig out information. She’s smart, brave, daring, fearless, and very likeable. I enjoyed reading her story (especially her bond with Paul, his dad, and their housekeeper), and she’s a great heroine who doesn’t whine when life gets tough.
The guys she lives with are hilarious. They act like stereotypical college athletes. Troy can’t keep food in the house, they have all kinds of funny things to say, and they really are just big softies. I really liked them. They were concerned about Troy, and were always willing to help her if she needed them.
The story was gripping, to say the least. The mystery was not a fast-paced as some I’ve read, but that actually made the story more believable to me. Troy ran into some snags, everyone was in some danger… but just enough to make it real. Some mysteries seem a bit too far-fetched to be taken seriously. This story could have happened.
I don’t want to give away too many details! I enjoyed the twists and turns of the story. It kept me hooked. There were a few typos, but I read the unedited proof, so I won’t hold that against the author. I’m sure they are all ironed out by now! Definitely read this. I was a little wary because of the cover. Yes, I’m a cover snob. There wasn’t a lot of thought or creativity put into the cover design, so I was worried the book itself would reflect that. Not true! I really liked this book, and have already lent it out to a family member.
Posted by Jana at 8:37:00 AM