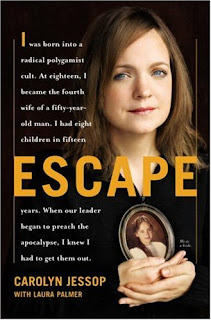 Back in October 2009, I pulled this book at random off a shelf at the library, and boy, am I glad I did. It is the story of a woman, Carolyn Jessop, born into a polygamist community in Utah. She became the fourth wife of a man more than thirty years her senior when she was eighteen. (Over the course of his life, her husband had more than a hundred children by fifteen different wives.) Her husband mistreated all of his wives, to the point of slavery and extreme domestic violence, but these women still strived for his affection, even though they knew they didn't love him. They also challenged each other and did not stick together. Life was miserable for Carolyn in this religion; in extreme sects of FDLS (Fundamentalist Church of Jesus Christ of Latter-Day Saints), women have absolutely no rights or freedom.

The climax of the book is where she plans and executes her escape with her children from the FDLS sect and her husband. In order to properly be separated, she must cross the state lines into non-FDLS territory. Her children, particularly the older ones proved to be the hardest obstacle in her escape. Some felt torn loyalty between her and their father and were not eager to leave their community.
The part that scares me the most is the fact that this is happening in modern day...not five hundred years ago like it sounds like it would. She went on to become one of the few women who ever challenged her husband and religion, and the first to successfully leave the community with all of her children. The compound was later raided by police in 2008.

This book is full of encouragement and knowledge for those like me who were completely ignorant about FLDS and polygamy. The writing style is not the best, but was very thought-provoking nonetheless.