Kimberly's Review of "The Eye of the Crystal Ball" 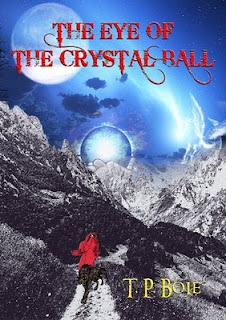 Book: The Eye of the Crystal Ball

How I got it: From the author.

"When Sara was newborn her parents left her at the doorstep at Mr. and Mrs. Schneider’s house. When Sara was ten she discovered she was telekinetic. She began to move stuff around when she got angry just by her will alone. When Sara was twelve her real parents came for her and took her with them to live like the Gypsy that she was – or Romani as they like to call themselves. They told her she was going to fulfill a prophesy. That it was once said that out of the Romani people the greatest sorceress who had ever lived would be born. When Sara was thirteen she had a baby brother and when she was fourteen he got very sick with a strange illness. To save her baby-brother Sara sets off on a quest to find his cure – well knowing that it will cost her dearly. Soon Sara finds herself going through the Singing Cave, crossing Wild Witches Valley, talking to a ten foot giant snail, rescuing the Beads of Souls from the Hell-hounds, escaping a spell in Vamila, the Forest of Vanity, visiting the king at the City of Lights before she finally reaches the Black Castle where she is told the Eye of the Crystal Ball can tell her how to cure her brother’s strange illness. But nothing is free in this world - and as Sara soon will know - everything has a price." (From Amazon)

What to say about this book… I feel very conflicted about how I will rate this, and how I feel about it over all.

Ok, we’ll get the not as nice stuff out of the way.

What I didn’t care for: The writing felt choppy in places. The pacing was off at times and it felt like it was a bit of a challenge to follow it. The copy I read had numerous grammatical and spelling errors. (It was NOT the final version however. And upon talking with the author I found out that English is her second language, and that the book has since been handed over to a great editor.) I felt like some of the things that happened, just happened. There wasn’t really any build up to it, so it just felt like… Oh, this needs to happen so there.

What I liked: Sara is a great character, she’s strong and when she decides to do something, she does it. It’s always refreshing to read a novel with a strong female lead. Too often they are weak, whiny and constantly depending on the men to save them. (I won’t name titles…) The idea of the Romani life sounds fascinating. I loved the descriptions of how they traveled around, what Sara learned from them, and their various skills. There were bits and pieces of other literature, especially fantasy running rampant throughout the book. If you are as much of a fan of fantasy as I am, you’ll recognize it. It’s a bit like talking to someone new and hearing them say something that you know comes from one of your favorite books. It was a treat picking out the various references. You’ll find everything from The Neverending Story to Lord of the Rings to The Chronicles of Narnia.

I had to get used to the writing style. It was more of a… storytelling style. Instead of descriptions that showed me how everything looked, how people reacted, etc, I was told. It was a bit like sitting in a class with the Professor telling a story, or having Granny (My father’s mother) tell me stories when I was young. It was a bit to get used to, but once I did I found I kinda enjoyed it.

Overall, it was a pretty good read.