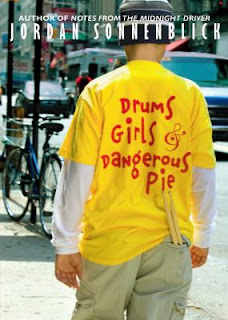 Author: Jordan Sonnenblick
Publisher: Scholastic, 2004
Rating: ★★★★
Steven Alper's life is fairly typical of your average 8th-grader. He plays drums (and he's really great, not to mention dedicated), he gets decent grades, and he's annoyed by his (totally adorable) 5-year-old brother Jeffrey. But Steven's life, and those of his family, are thrown into a whirlwind of hospitals, medications and constant anxiety when Jeffrey is diagnosed with leukemia. Not only does Steven have to process the fact that his younger brother may not live to see middle school, he has to deal with a father who can no longer communicate, a mother who must quit her job to care for her younger son, and Jeffrey's own fears and uncertainty of what will happen to him. And he still has to worry about grades and stuff. That's a lot for a 13-year-old to deal with.
It's not easy to write a funny book about cancer, but Sonnenblick did. Let me just clarify: the cancer is not funny, but humor is still a part of the writing and is present in the characters' lives, despite the grim issues Steven has to deal with. Steven has a keen sense of humor, and I often found myself smiling while reading certain passages. His voice is also perfect, and I love that he's so intense about his drumming, and so fiercely protective of Jeffrey (even if he doesn't realize it).
The way Steven's parents deal with the news and Jeffrey's treatment are wildly different. While his mother drops everything, including her job as an English teacher, to take care of Jeffrey and learn everything she can about his disease and the treatment, his father shuts down emotionally and immerses himself in his accounting work. The Alper's financial situation is dire because of Jeffrey's leukemia, and Steven becomes very aware of this.
Sonnenblick never forgets his main character is in middle school and is just trying to get by without looking like an idiot (he's not always successful). His grades start to slip, and his image is still super important to him (keep an eye out for the school dance scene).
And the "girls" part in the title? Those girls are Renee, gorgeous neighbor and girl of his dreams; and Annette, friend and fellow musician (basically she's a piano genius). I loved watching Steven's relationship with both girls grow and change over the course of the year—not only do we learn a lot about each girl and their little complexities, we learn a lot about Steven by how he reacts to each one. Also, he can be super clueless when it comes to girls, but hey, I guess that's understandable. He's only 13, after all.
Alternately funny and heartbreaking, this is a great read. There aren't many books that tell the story of the sibling of a cancer patient, and I'm very glad to know this one exists. Humor is so important to have in the face of tough times, and this book serves as a good reminder of that, especially for teens who don't know what to do when faced with such horrible, life-changing things.
Disclosure: I bought this book from my local bookstore.
Posted by Tahleen at 12:09:00 AM