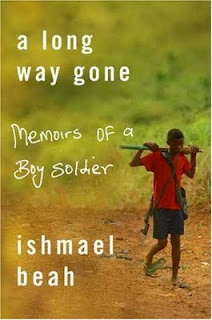 Title: A Long Way Gone: Memoirs of a Boy Soldier

Author: Ishmael Beah
Published: Sarah Crichton Books, 2007
How I Got It: Purchased myself
Rating: 4 stars

Summary:  At the age of twelve, Ishmael Beah fled attacking revels in Sierra Leone and wandered a land rendered unrecognizable by violence.  By thirteen, he'd been picked up by the government army, and Beah, at heart a gentle boy, found that he was capable of truly terrible acts.  At sixteen, he was removed from fighting by UNICEF, and through the help of the staff at his rehabilitation center, he learned how to forgive himself, to regain his humanity, and, finally to heal (from back cover).

Honestly, I don't even know how to begin this review.  This was such a depressing but educational (for me at least) memoir.  A Long Way Gone

is a horrifying account of the life of one child solider, Ishmael Beah.  We've all heard of child soldiers but I guess I never really thought about how horrible it was.  You know when you hear about something but it's hard for you to put it into perspective?  Well this book was quite the wake up call.

Ishmael was a happy-go-lucky kid.  He had heard of the war in his country but never thought it would ever come close to his village, let alone destroy it.  He was separated from his parents and had to flee his village with a few friends.  The four boys walked for a couple days until they arrived at the village of Ishmael's grandmother.  Sadly, her village had been taken over as well.  They  couldn't stay there so they kept walking just looking for a safe place.  Ismael and his friends ended up wandering around Sierra Leone for several months (I think it was close to a year, but I'm not exactly sure).

I can't even imagine this.  Being twelve-years old and you're on your own with a few other friends.  Wandering around the country trying not to get kidnapped or killed and having to steal food or starve.  It's heartbreaking.

Ishmael, like many of the other children, was manipulated into becoming a soldier.  They came across a village they thought was safe, and at first it was.  Slowly he was given small tasks to do (helping prepare dinner for the village, working in the fields, walking around the perimeter of the village).  All leading up to one day when they handed him and the other children their own guns with bullets.


This is a depressing and gruesome book.  If you want to know more about the life of child soldiers I would recommend reading this.  There were a few times when I had to put the book down because of some grotesque or depressing details, especially because you remember that children committed these horrible acts of violence.

When I first finished reading A Long Way Gone

I wasn't even going to review it.  I knew because of the subject matter it would be too difficult to put my thoughts into a nicely flowing review.  But I also want more people to be aware of this book.
Posted by Jen at 3:15:00 PM