As I was sitting here brainstorming a fun topic for my bookish post today, I was hoping to write a post that would combine my two passions: reading and graphic design. I started googling a bunch of stuff and came across some posters that different companies and organizations designed for their campaigns orchestrated to get people to read! Some of them are very clever, and I just had to share!

This first group is from a public awareness campaign for reading in South America, designed by the advertising agency, MAYO DRAFT FCB in Quito, Ecuador. Both images are extremely creative, but the first one is my favorite. I love the picture of the little boy, and that he's imagining himself as a king in a castle. Who wouldn't want to be in his shoes right now? 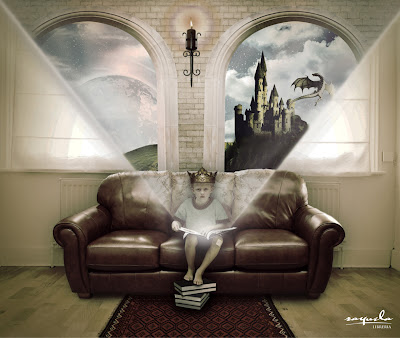 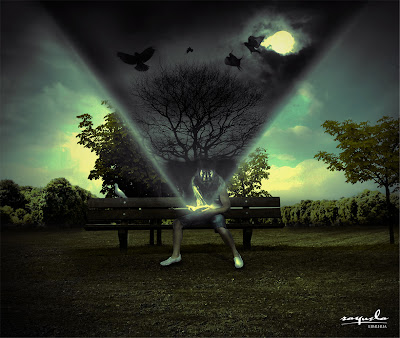 This next set relates to children, and to the child in all of us. Heroes read too!  This campaign was put together by Publicis, Prague, and launched by BOOKS to promote its brand image and encourage people to read books in the Czech Republic. Here's an interesting ad campaign against illiteracy! I love this. "The world is a dangerous place for the illiterate." This set was done by the Dm9ddb Publicidade advertising agency for an anti-illiteracy Campaign in Brazil. It was released in 1998. The first image shows a man ingesting suppositories by mouth. Eeeew! The second one shows a man brushing his teeth with Hemorrhoid ointment. Gross! How effective is this strategy, though? I think it does an amazing job at hitting home the importance of reading. 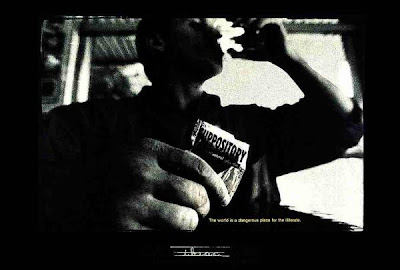 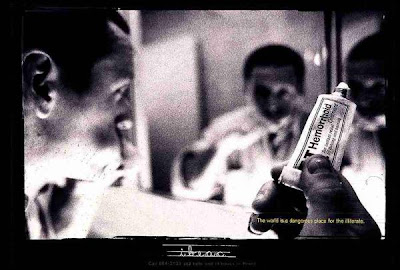 This last campaign, done by the Literacy Foundation on the eve of their 10th anniversary, is my favorite! The slogan reads, "When a a child doesn't read, imagination disappears." How true is that? With the growing epidemic of video games and movies replacing good old-fashioned reading, where are people going to develop their imaginations? We all need a little brain food in our lives to keep us young and intelligent!

I really enjoyed looking for all of these different campaigns. I may be biased, but I'm a firm believer in the age-old saying, "a picture is worth a thousand words." As a graphic designer, my job is to express ideas and words through imagery. What an awesome job these designers did at expressing the importance of reading to the masses through simple images that everyone could understand. Hopefully the "thousands of words" these posters painted in my mind have inspired people to go out and read  (or learn to read) thousands upon thousands of other words. :)
Discussion: One of the campaigns I stumbled across had a grammar error, so I would not post the image. The slogan was, "If reading were be forbidden, would you be tempted to try ?" I'm assuming they meant "if reading were to be forbidden...", but anyway... Their imagery went off of Adam and Eve and the forbidden fruit. I loved the concept, but I just can't post bad grammar, especially if it's regarding illiteracy! My question is, though, would you? If you were born into a world where reading was against the law, are you the kind of person who would break that law  to see what the big deal was, or would you remain a good, law-abiding citizen? I'll think on this also, and report back later with my thoughts! I'm curious to read your responses!
UPDATE - 4/29/11: A commenter asked for the original image of the "forbidden" campaign, so here is a link to one of the images: "Forbidden" . I can't find the Adam and Eve one that I mentioned, but you can at least see this one.
Posted by Jana at 1:06:00 PM