As you may know, I adore Margaret Atwood. At the beginning of the semester, when I learned she would be coming to my university, I nearly jumped with glee. I told everyone I know. They didn’t really care (I’m friends with too many pre-med people), but whatever. What’s more, I learned through the grapevine (aka the English Club list-serv) that I could sign up for a Q&A the morning after the talk! Basically, I was in heaven.

[Note: I didn’t take notes at the reading—though I did during the Q&A—because I didn’t want to miss anything, so that is why my discussion of her reading isn’t going to have very much detail. For slightly more detail, check out this article (which reflects my sentiments exactly) from the Cornell Sun about her reading.]

I waited and waited, and finally March 30th rolled around. I got to the auditorium nice and early, snagging myself a seat in the third row (nice and close, but not so close I have to crane my neck). Atwood was introduced by J. Robert Lennon, an author and Creative Writing professor here who wrote a fantastic article last fall about Atwood for The Walrus. And then…Atwood came out onto the stage. I literally held my breath. I was in complete disbelief that she was actually standing there, just a few yards from where I was sitting. I thought I was going to pass out. But I didn’t. And then she started talking, and started reading. She read a few absolutely hysterical stories from The Tent (including one depicting her cat’s discussion with God, and another called “Three Novels I Won’t Be Writing Soon,” such as “Worm Zero,” in which all of the worms in the world die), a couple non-humorous but still amazing poems, and an excerpt from The Year of the Flood. She then took a few questions, which she answered wittily and thoroughly, going so far as to ask one girl what more she would like to know.

Basically, I left Atwood’s talk thinking that if it was even possible for me to adore her even more, I now did. 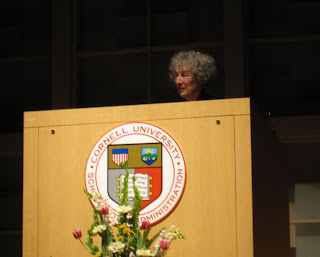 The following morning, I woke up bright and early for a student Q&A, and this time, I was literally 3 feet away from her. It took a lot of self-restraint to keep myself from jumping up and hugging her.

I did take notes during the Q&A, so here are some of the questions and her (paraphrased, sorry) responses. Sorry these are kind of random/disorganized. She covered a lot in her responses, and I thought you guys might want to read some of them.
And the best part of the Q&A? At the end, I went up to her to get my book signed (The Blind Assassin, which I happen to be reading right now so I have it with me at school), and I mentioned that I write for The Broke & the Bookish and that I had written a piece about her last fall, and she seemed to remember it! Yay!

Sorry if this post was long and rambly. Seeing Margaret Atwood was one of those things I thought would never actually happen, and, honestly, I think I’m still kind of in denial that I really did meet her!
Posted by Natanya at 12:02:00 AM