Kelly's Review of "A Million Little Pieces" by James Frey

Author: James Frey
Published: Nan A. Talese, 2003
Where I Got It: Goodwill
Why I Read It: I decided to branch out of HF for once! 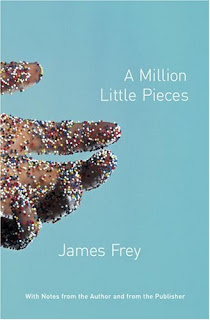 Oh Oprah, you and your book club choices! I actually scraped the O sticker off my copy of the book before I read it in public...but that's a whole other rant.
Anyways, this was a pretty interesting story about James Frey's six week stay in rehab when he was 23 years old. We learned about his life before he was hospitalized, and then the people he meets along the way. I actually liked hearing about his new friend's lives and struggles more than James'. We are also graced with some really disgusting descriptions of vomit.
I was very disappointed in the way that James actually kicked his habit...he basically passed off his meetings and exercises and didn't do much of anything. I think this is misleading, leading other to think that just staying in a rehab center for six weeks, separated from your drug of choice, will instantly cure you. I don't know, maybe this is the point? In my opinion, it was rather weak.
However, the thing that bothered me most about A Million Little Pieces is rather ADD on my part: there are absolutely no quotation marks in the writing. None. It's a bit of a struggle to read and follow along with who is saying what and when. Also, commas are very sparse, rarely used when they are obviously needed.

Towards the end of the book, James is 'confessing' his sins (even though he doesn't believe in a god) and writes down all the sins he can remember committing, starting from when he was just a child. He truly did some horrible, horrible things in his pre-rehab days; this just reinforced the fact that I honestly never felt sorry for him once...until I go to the very last page. It absolutely broke my heart.
I also kept picturing the narrator as James Franco's character in Pineapple Express....the dirty pajama pants and messy hair.

I missed the whole controversial arguments involving the book, but I honestly don't care, it was still just a 'meh' for me. 3 stars.
Posted by Kelly A. at 2:06:00 PM