R holds forth on Important Artifacts and Personal Property from... by Leanne Shapton 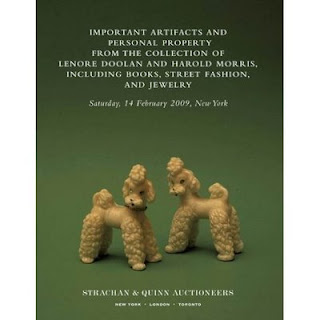 Important Artifacts and Personal Property from the Collection of Lenore Doolan and Harold Morris, Including Books, Street Fashion, and Jewelry

by Leanne Shapton
Farrar, Strauss and Giroux, 2009
How I got this book: The library; O, hallowed repository of knowledge.
Why I read this book: The title attracted my attention. (It is strangely gratifying to type it out in full.) Also, there are pictures. Lots of pictures.
So basically, this book chronicles the blossoming and subsequent disintegration of the relationship between Lenore Doolan and Harold Morris... through presenting their mementos as auction lots.
I think it is interesting to point out that, as far as the basic narrative goes, no new ground is broken here. It's pretty openly indicated in the blurbs and synopsis on the back cover: The story here is the age-old boy-meets-girl-and-then-they-break-up plot line that is seen all too often in fiction (and, unfortunately but pertinently, also in real life).
But that doesn't matter, because the narrative isn't the point. The first of the couple's books to be put under the hammer in the fictional auction - well, I think it was the first; my memory may have deceived me... still, it's only a minor point, so heigh ho, on we go - is Exercises in Style by Raymond Queneau, which struck me as being a bit of a parallel to what Shapton was endeavouring to do here. From what I've gathered thanks to it being on my to-read list, Exercises in Style features the same scenario played out over and over again, each time retold in a new style...
So there you have it - The point of the book is that this is an age-old story retold in a totally different way, disdaining regular prose for the elaborately mocked-up auction lots. Considering that Shapton is primarily known as an artist, I guess that's the artist's heightened sense of presentation evincing itself.
The main thing I like about the whole conceit of auction lots is that, if you think about it, it's actually so mundane. I don't mean mundane as in boring, I mean that it's something familiar, something that a reader could connect more easily to his or her life, especially considering how it deals with a theme that - as I mentioned briefly earlier - occurs frequently in the realm of reality.
I understand that Shapton drew inspiration for this volume when going through auction lots and realizing how much could be gleaned about the owners' lives. And that's what it is, really. The little souvenirs in the book could easily have been some of the random knick-knacks that any non-fictional, real live person has accumulated over the course of a relationship - or, actually, over the course of his or her life. And, in fact, if the non-fictional, real live person in question were to sit down and go through their belongings, arranging them chronologically as has been done in this book, a fairly accurate timeline of their lives could very well be revealed.
As a direct result of all that, my belief somehow has been suspended nearly as far as it can possibly go, and there's a part of me that almost believes that Lenore and Harold exist, somewhere out there. The fact that the actors' names aren't mentioned anywhere in book (as far as I could tell) adds to the whole Twilight Zone feeling, although a Google search quickly surrendered their names up to me. (But I shan't tell you because that would totally spoil the magic of it all.)
Incidentally, in reading up on stuff for this review, I found out that the book has been optioned to be made into a film starring Brad Pitt and Natalie Portman. Now, I like Brad Pitt and Natalie Portman. But the inexplicably visceral Twilight Zone thing inside me did in fact lead me to think, No! What a cop-out, they aren't the real Doolan and Morris! - as if the real Doolan and Morris actually existed.
So yes, to sum it all up, I am in fact a creepy voyeur with a shaky grasp of reality. Also, while I'm not sure if this is the kind of book I'd pore through over and over again, I predict that I'm going to be fondly thinking about "that auction book thing" for awhile yet. It gets 4 stars from me.
Posted by R at 10:37:00 AM