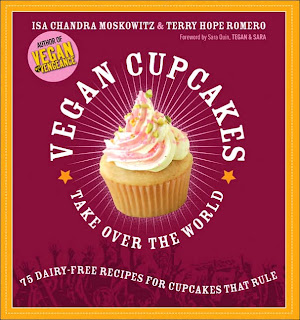 Title: Vegan Cupcakes Take Over The World: 75 Dairy-Free Recipes For Cupcakes That Rule

How I Got This Book: Purchased myself a few years ago

A few years ago I came across this book, an entire book of vegan cupcake recipes. This intrigued me because I was interested to see how well a cupcake would turn out with no eggs or milk. Honestly, I didn't think they would be very good...they'd be too dry or dense. But I'm never one to turn down a cupcake so I bought the book and headed to the grocery store to pick up a few ingredients.

For the next couple of months I baked a different kind of cupcake every week. And you know what? They all turned out delicious. Since I was making so many cupcakes I would share them with pretty much anyone who wanted to try them. Unfortunately, I know people who would not try these cupcakes if I told them that they were vegan cupcakes. So I tricked those people into eating them. They were all shocked to learn that the dessert they were going back for thirds and fourths for were vegan.

There is quite the variety of cupcakes recipes in this cookbook. They range from your basic chocolate or vanilla cupcake to a banana split cupcake to a s'mores cupcake to green tea cupcakes to coconut lime cupcakes. Plus there are recipes for vegan frosting. Is your mouth watering yet? The peanut butter cupcakes are a personal favorite, I've made those multiple times.

However, I do have one gripe about this book. It lies. There are not "75 dairy-free recipes for cupcakes". I counted. There are only 39 cupcake recipes. Then there are an additional 14 recipes for frosting or glaze. 39 + 14 = 53. So where are the other 22 recipes?? I'm thinking the authors are counting the variations listed at the end of some of the recipes. That disappointed me a little, I was looking forward to 75 original recipes.

Overall, this is a great book filled with amazing cupcake recipes. If want to make a batch of vegan cupcakes or just try a new recipe (apple cider cupcakes anyone?), then this book is a great place to start.
Posted by Jen at 10:39:00 AM