Kelly's Review of "The Reader"

Author: Bernhard Schlink
Published: Vintage, 2008 (originally 1995)
Where I Got It: Creeping around the shelves of Goodwill
Why I Read It: I refuse to watch a movie before I read the book 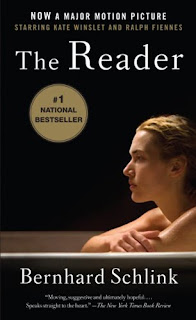 When fifteen year-old Michael Berg becomes sick on his way home from school one day, he is rescued by Hanna, a much older woman who cleans him up and escorts him home. When he later goes back to thank her, they begin a hasty and secret love affair. A large majority of their time spent together is simply Michael reading aloud to Hanna, literally acting as “the reader.” About six months into their affair, she simply disappears. It isn’t until several years later when Michael, now in college, finds Hanna again, in court being accused of Nazi war crimes against Jewish people.

In order to properly read and understand this book, you need to look past the fact that a thirty-six year-old woman is getting it on with her fifteen year-old boy toy. I could write an entirely separate review on the Freudism of this relationship. It is actually an unimportant part of the story, no matter how hard it is to ignore (hence the ‘icky sex’ tag).

It wasn’t until their sixth or seventh day together that Michael finally asks the woman her name. This is our first hint of how secretive Hanna is (or how dumb Michael is). She is also very moody, kicking Michael out when he says that school is pointless and hitting him when he goes to the store without telling her. Just as easily as she loses her temper, she becomes her normal passionate self. When Hanna picks up and moves away without telling Michael, he is consumed with sadness and regret. His body yearns for hers and she is all he thinks of until he learns to let go. Her memory does not follow him anymore and he can move on with his life.

When Michael next sees Hanna, he is in law school and observing a courtroom seminar dealing with Nazi war crimes. One of the defendants of interest is Hanna. Michael learns that Hanna was a concentration camp guard and how she inadvertently had a hand in the death of dozens of Jewish women. We don’t get a lot of emotional reaction from Michael, we get it through the viewpoint of the sole Jewish survivor. You would think that Hanna’s past as a Nazi guard in Auschwitz would be her most disgraceful secret, but to her, it’s not. The secret that she finds more shameful and refuses to reveal is keeping her from defending herself. The price she pays is immense.

I’m not revealing the verdict of the trial or what happens to Hanna or Michael; you can find that out for yourself. The Reader is a book full of secrets, love, guilt, and their consequences. It is written in memoir form, which makes me feel as if we lose the in-the-action feel. I am glad I read it, but I don’t think I’ll ever read it again.
3.5 stars.
Posted by Kelly A. at 8:54:00 AM