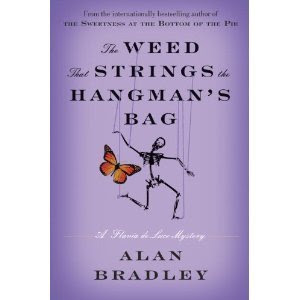 Author: Alan Bradley
Publisher: Delacorte Press
Year Published: 2010
Notes: I checked this book out of the library, and I read it because I picked up the first Flavia de Luce mystery (The Sweetness at the Bottom of the Pie) a few weeks ago and loved it!

The Weed That Strings the Hangman's Bag is the second installment of Canadian author Alan Bradley's Flavia de Luce mysteries. Situated at an old family mansion in a mid-20th century English hamlet named Bishop's Lacey, the books center around protagonist and narrator Flavia de Luce. She is an exceedingly bright and charming 11-year-old and well-versed in chemistry (particularly poisons). She lives with her father and her two sisters in Buckshaw, her deceased mother's family house; Flavia gets around town on a bicycle she has named Gladys.

In this book, Flavia encounters a puppeteer and his assistant, who give an impromptu show to citizens of Bishop's Lacey. Things go awry and the puppeteer is electrocuted. Somehow Flavia discovers threads that connect this death to a mysterious death a few years ago…

Along her way to the solution, Flavia encounters a slew of unusual, cracky characters who are eccentric but interesting, and keep the book moving forward. The reader also meets another of Flavia's relatives—this one her father's spinster sister.

Flavia has both street smarts and book smarts. She's messy and rumpled. She disobeys authority, but not without good reason. She has a rational and sensible way of deducing the layered mysteries that she encounters. But better yet, as an 11-year-old, Flavia is able to get people to talk. Nobody expects her to surpass the police in solving crimes. Everyone, including her family, underestimates Flavia:

Of course I was! It was one of the things I loved most about myself.

Eleven-year-olds are supposed to be unreliable. We're past the age of being poppets: the age where people bend over and poke us in the tum with their fingers and make idiotic noises that sound like "boof-boof"—just the thought of which is enough to make me bring up my Bovril. And yet we're still not at the age where anyone ever mistakes us for a grown-up. The fact is, we're invisible—except when we choose not to be. —p112

Her natural curiosity and penchant for detail leads her to the solution, and the journey along the way is both nerve-wracking and hilarious. I cracked up over so many of Flavia's entertaining observations and her youthful lack of knowledge over "affairs."

Bradley has deftly weaved a witty humor with juvenile curiosity and unbelievable murder mysteries. The revelation at the end of the book left me shocked and chilled to the bone. These are light-hearted books in comparison to the forensic, gory thrillers that abound, but they have an undeniable grittiness.

It is a testament to his writing that Flavia stands out in so many readers' minds as a unique and awesome character. I highly recommend this book, and give it 5 stars.
Posted by Jess // Curating Style at 9:15:00 AM