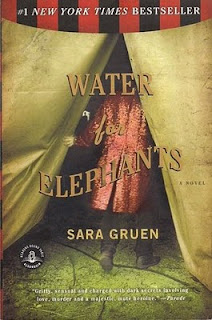 by Sara Gruen
Publisher/Year Published: Algonquin Books, 2006
How I got a hold of this book: I bought it at Borders.
Why I read this book: I avoided this book for a couple of years because I've been so disappointed by several books that have received a lot of hype. But the one day I saw that Reese Witherspoon was starring in the film adaptation, so I bought the book.
Rating: 5 stars--Once I actually started reading the book, I loved the concept of running away and joining the circus. I loved seeing the development of the protagonist's relationship with other members of the circus company. And I loved the development of his character as an old man, which intersperses the chapters of him in his 20s. I will definitely read this again and it might even become a favorite.

The scene starts with a scene of mayhem as the menagerie has been set loose while a circus is underway. Our narrator looks across the tent, searching for "her." Soon after he sees "her," "she" kills the bad man with a stake to the head. So begins the prologue of this tale. From there, the reader goes into the mind of a 93-year-old man unhappily living in an assisted living home. As a young man living during the Great Depression, his life fell apart, he dropped out of vet school, and he joined a circus.

As a person who has often joked about running away and joining the circus (I'd be the daring young woman on the flying trapeze) I was hooked by this point.

In the Q&A with the author at the back of my edition, I read that Gruen did a lot of research in writing this novel. I think that this dedication shows in her prose. She created convincing and dynamic characters. Even her stereotypical characters, such as the evil man in charge of the circus, had a third dimension that made them real and not just flat. It would have been so easy for Gruen to fall into the trap of giving the reader the static kind of freaks and clowns normally expected in the circus. Gruen introduces the reader into the company and makes them feel privy to the behind the scenes interactions among a large and disparate group of people.

Another thing that Gruen does really well is write from a male perspective. As someone who has taken creative writing courses, I know how challenging it is to create a convincing narrator of the opposite sex. To be able to take the male narrator from his 20s to his 90s and still be convincing shows Gruen's story-telling capabilities. The depth of Jacob in his 90s made me think a lot about my grandparents and growing older. I loved Jacob's fire and determination to take care of himself as an old man; I hope my grandparents are like that when they're his age. Heck, I hope I'm like that when I'm his age.

Though the love story was pretty evident from the get-go, I recommend this book to people of all ages (my grandma has it right now) because of the amazing story about working on a circus during the Depression and the belief that just because you get older, it doesn't mean you're less capable.
Posted by Lori at 9:56:00 AM