How to buy happiness (that isn't a book) 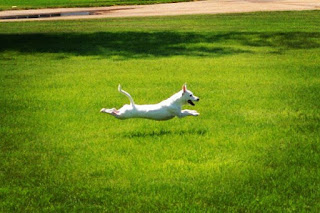 October is National Adopt A Shelter Dog Month. In an effort to help spread awareness and encourage everyone to consider adoption first, I (Kimberly) thought I'd share my own shelter dog story. Promise you're going to love it!

I grew up with dogs, so did my husband. It wasn't even a question of if, but WHEN we would adopt a dog. We had only been married for a couple months when I started looking online at local rescues. We weren't picky about what we wanted. Just something that would be a good fit for our townhome and our full time schedules. (Smallish, not a puppy)

After a few unsuccessful adoption fairs we decided to check out the Humane Society of Utah. Before we drove out there we looked at their website to see who was available for adoption. The only one that stood out was Copper. He looked cute in his picture, was described as friendly and great with pets and kids.

When we got to HSU we asked about him first. That "small, sweet dog"? Over 50 pounds, difficult to control, completely uninterested in us, only wanted to bark at everything that moved. While I'm sure he was the perfect fit for someone else, he would have been miserable with us. (We have a small backyard. He was known to scale fences over 6ft.)

So we went back to prowling the isles.

I walked past a kennel that I at first thought was empty, I quickly backtracked when I realized there was a small dog sitting in the back. When I stopped by the door she stood up and walked up next to the door. She had a small, barely healed sore on her nose. She was silent. Every kennel around me was practically vibrating with its occupants' enthusiastic greetings.

I opened the door and crouched down, ready to catch her if she ran out. Instead, she walked directly to me and put her paw on my knee.

Just like that, I fell in love. I knew at that moment I wanted her to be ours. I picked her up and she immediately curled into me, cuddling close. Still, I was nervous. What if she was aggressive around other animals? Or other people? We grabbed a leash and took her outside to play.

She was perfect. She walked right next to me, every few seconds she'd glance back, as if she was checking to see if we were still there. When we got to the enclosed dog run we took her off her leash to play. Instead of charging the fence to bark at the other dogs, she ran right back to us. If we knelt, she'd roll on her back for belly rubs. She completely ignored the ball. I picked her up again and just like before, she cuddled into me.


I looked directly at my husband, "She's ours."

"Are you sur--"
I plopped her into his arms and she curled into him, just as she had done with me.
"Oh."
Then I watched him fall in love.
That was it. She was ours.

We walked her back into the lobby and I went right up to the desk and told them we wanted to adopt her. They told us what little history they knew about her. She was 7 months old, had been at HSU for two weeks. Before that she'd been in a shelter in California for over a month. She'd spent almost half of her short life in a kennel.


The adoption process was easier, but also more complicated than I had imagined. We had an interview as well as a contract, promising that we would treat her right. The questions ranged from "do you know how to train a dog" to "No scientific experiments". Apparently we passed and didn't come across as animal abusers because about an hour later we were walking out the door, a family of three.
On the way home she got a new name. In the shelter she'd been called "Annie". She didn't respond to it, and we already had an Aunt Annie and a family friend's dog was also called Annie. So, in the spirit of one of my other favorite orphans, she became Cordelia. (Anne of Green Gables, anyone?)

We stopped at on our way home and bought all the essentials. Dog dishes, food, treats, a collar, leash, puppy packet, dog shampoo, blanket, dog bed... (You're welcome, Petsmart).

That night we bathed her, fed her, and fixed up the kennel so she'd be comfy overnight. We had no sooner closed the door on the crate when  she started to freak out. Whining, scratching, shoving her nose into the wires on the doors. We pulled her out as quickly as we could. The sore on her nose had reopened and was bleeding. (Which explained what had happened in the first place.)
Instead we put her on the bed. She immediately settled down and went to sleep. She has slept there every night since.

The next several months we learned a lot.

First, she was actually a pure bred Jack Russell Terrier, instead of the Chihuahua mix the shelter had told us she was. (We weren't picky about breed!)

She had horrible separation anxiety. RIP blinds, carpet, and shoes...


She didn't know how to play. We had to teach her. She quickly discovered that her favorite toy is a squeaky ball

She had issues with food. She would cower if we startled her and we wouldn't be able to get her to eat again for several hours.

She loves anything soft. I guess after spending so much time sleeping on a hard floor in a shelter she has to make up for lost time.

She rarely makes a sound, but will give a short howl of excitement when we get home.

She is very protective of anyone she has deemed to be "hers". Us, my nieces and nephews, my neighbor... She once chased a much larger dog off the block because he was too close to the little girl next door. (Cordelia is a whopping 11 pounds, this other dog was around 40.)

She no longer knocks over the trashcan when we leave it out, instead, she picks what she wants out of the top.

She is the laziest Jack Russell I've ever seen. She'll sleep past 10am if you let her, and is done for the day by 8pm.

She loves people, and I love seeing her charm even the grumpiest of people.


We worked through our problems and learned how to make her the happiest we could. In return, she has been one of the best parts of our lives.

If you actually read this, you deserve a cookie. Have you ever adopted a pet? What's YOUR story? Please share in the comments below! I've included some links to help you find your own rescue baby.

The Humane Society of Utah
American Humane
Pet Finder
Adopt A Pet
Best Friends
Posted by Kimberly at 10:55:00 AM