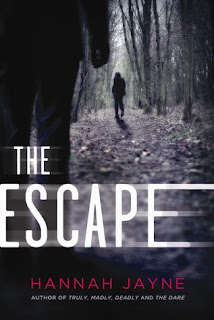 When two boys walk into the woods, and one comes out covered in blood, what would you believe?
Fletcher and Adam venture into the woods for an afternoon hike, but when day turns into night and neither boy returns, their town is thrown into turmoil. Avery, the detective's daughter, is the one to find Fletcher - dishelved, disoriented, and covered in blood. He has no memory of what happened, but Avery can't shake the feeling that something's off. When Adam's body is finally found, Avery is determined to uncover the truth. But if she stands by her gut, and Fletcher, is she standing by a friend, or a murderer? The answer might cost her her life.

This was a nice psychological thriller that I read in about two sittings. Fletcher is the weird kid in school that most people just ignore, Adam is the jock that every adores, and Avery is the smart girl that people just label as the police chief's daughter. Adam is one of Fletcher's only friends and they go on a hike that ends up in tragedy. The day after the hike, Fletcher is found close to death by Avery, while Adam was still missing.

Fletcher tries so hard to remember what exactly happened to him. You can almost feel his agony with himself, his anger at not being able to remember to help Adam. Adam's body is found and Fletcher's life is thrown into a hellfire. Now his classmates say he killed Adam, instead of previously speculating that there was a killer on the loose.

This has the small town feel that reminding me of the Salem Witch Trials. I felt like the townsfolk where scared, and looking for someone to blame. All the while Avery takes up a place beside Fletcher to help him remember.. to remember anything and to also just be his friend. Avery takes after her dad and tries to do a little detective work. She thinks of everyone's safety at all times and always has her sights set on finding Adam's killer.

Overall, I enjoyed this book. Unfortunately, I guessed who the killer was midway through the book, but to be fair.. I do that quite frequently and it is annoying. I run books and movies for myself. I'd recommend this book if you are looking for some mystery, detailed/in-depth characters, and a completely mind-bending reading experience.

About the Author
Hannah Jayne is possibly the only person living in Silicon Valley who has never worked in high tech. When she’s not writing, she’s obsessively watching HGTV or shopping at Target.. also obsessively. Find out more about Hannah’s urban fantasy, young adult thrillers, and latest obsessions at hannah-jayne.com.


Now on to the giveaway! Giveaway ends July 31st. Open to U.S. and Canada residents only. Must be 13 or older to enter.


Cross-posted at The Tattooed Biblio
Posted by Lauren at 10:53:00 PM