Lauren Reviews A Discovery of Witches by Deborah Harkness 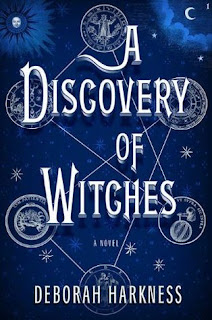 A richly inventive novel about a centuries-old vampire, a spellbound witch, and the mysterious manuscript that draws them together. Deep in the stacks of Oxford's Bodleian Library, young scholar Diana Bishop unwittingly calls up a bewitched alchemical manuscript in the course of her research. Descended from an old and distinguished line of witches, Diana wants nothing to do with sorcery; so after a furtive glance and a few notes, she banishes the book to the stacks. Her discovery sets a fantastical underworld stirring, and a horde of daemons, witches, and vampires soon descends upon the library. She has stumbled upon a coveted treasure lost for centuries-and she is the only creature who can break its spell. Diana is a bold heroine who meets her equal in vampire geneticist Matthew Clairmont, and gradually warms up to him as their alliance deepens into an intimacy that violates age-old taboos.

I honestly don't know where to start. Harkness took my soul, wrapped it around her pinky finger, and watched as her words made it glow in the darkness. Not only could I escape reality every moment I picked this novel up, but I felt the main characters' feelings. When they were heartbroken, my heart bled. When they were eloped in passion, i had naughty thoughts (and may have told the boyfriend). When they were scared, but brave... well you understand.

Back to the basics.. we have Diana Bishop, a witch who has chosen to refuse her own powers and instead has focused her life on being a professional academic. She calls up a mysterious manuscript from Oxford's library, realizes it has been spelled, and promptly sends it back. The problem is all of the creatures have perked up. Witches, vampires, and daemons alike are all vying for the manuscript that may hold the answer to how each creature was created.  In steps Matthew Clairmont, a gentlemen/scientist/vampire whom we all start to swoon over. Which is the only proper response.

Matthew wants the manuscript just like anyone else, but then he takes an interest in Diana. In her professional and personal life. He starts to see her as more than just another witch. Diana has always ignored her heritage as a witch. She has focused her entire life on her education and her professional and has earned all of her merits the good old fashioned way. Matthew tests Diana to be who she is. A man pushing a woman to be herself?

Can we love this man anymore? NO. The answer is no. I've decided to stop here. I don't want to ruin for you the AMAZINGNESS that happens with Diana and Matthew, but I'm sure you can imagine the storm the is a brewing. All I can say is if you enjoy some fantasy, some adult love, and amazing writing... just go buy this book. And then the sequel. And then the third book in the trilogy.