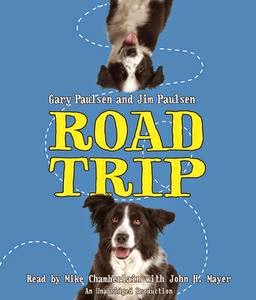 Road Trip by Gary Paulsen and his son Jim is a quick, fun middle-grade listen for summertime.

Ben is woken up early one morning by his father, who informs him they're going on a road trip for a few days to rescue a border collie puppy. Because they're on a border collie rescue list, and they already have an older border collie named Atticus, he's not too surprised. He is surprised, however, when his dad informs him that he quit his job in order to start flipping houses—and because money is tight, Ben can't go to hockey camp this summer. Ben is beyond mad, so he lashes out by inviting his older, and possibly delinquent, friend Theo along. What follows is a road trip like no other, where they meet new friends (and enemies), have some adventures, and work through their relationship issues on their way to a cute little puppy who needs them.

I downloaded this book from my library on a whim because I needed something quick on my phone for a run when I realized my iPod was dead. This was a great choice! I really like Mike Chamberlain as a narrator (I had encountered his work previously with Because of Mr. Terupt by Rob Buyea), and Atticus the dog, voiced by John H. Mayer, adds his perspective every now and then, which is great to listen to.

The audiobook is only a few hours long, but it is a satisfying story nonetheless. There is no shortage of serious situations, either; Theo is in some serious trouble when he crosses the wrong guy, and Ben is genuinely worried about his father's new jobless situation. Plus, they need to get to that puppy in time.

In short, pick up this audiobook if you're looking for a quick road trip book for the summer! It won't disappoint, but what else would you expect from Gary Paulsen?

Disclaimer: I got this digital audiobook from my local library
Posted by Tahleen at 7:00:00 AM