Julia Reviews A Gentleman 'Til Midnight by Alison DeLaine 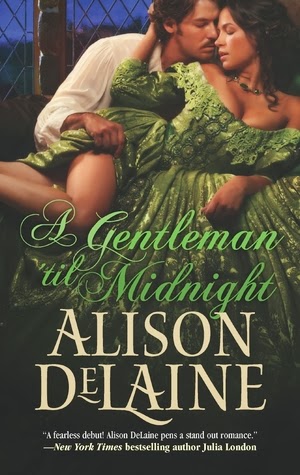 Title/Author: A Gentleman 'Til Midnight by Alison DeLaine
Publisher/Year Published:  January 2014 by Harlequin
How I got this book: I received an ARC from Harlequin in exchange for a review
Why I read this book: It came to my door and jumped out at me, because lady pirate!
Rating: 4 stars

What a better way to start a day then to find a historical romance book that takes new turns on beloved tropes. A Gentleman to Midnight goes from the high seas back to England all the while dealing with titles, family and a smoldering connection between our leads James and Katherine. Let’s SCORE it.

The Setting
A Gentleman ‘Til Midnight starts off on a pirate ship captained by a countess, Lady Katherine. After the first chapter I was quite taken. Yes. Pirates. Lady pirates at that. I am in love. The story starts off with the not actually pirate but pretty much pirate crew finding a ship-wrecked man. They decide to pull him aboard. This is our hero, James. He and Katherine have a history I guess, meaning Katherine hates James for being the captain who could have rescued her at one point in her past, but failed.

They spend some time on the ship as it heads back to England from the Mediterranean. They are heading back because Katherine is now a countess and they are trying to strip her of her (Scottish) title. Once they get to England (which is still in the first half of the book… woe), they must convince the peerage that she is worthy of her title and will fit in with society/not be a pirate any more.

The plot was a little plodding at places, especially toward the end. Some things that happened there I just rolled my eyes at and groaned. But this book does get major points for being not your everyday historical. Even when the story is back in London, it’s easy to tell that things are in their own type of London, different from the other historical romance land. It was refreshing.

The Characters
Katherine and James were not my favorite leads. Their characterization was somewhat annoying, but I will say that they are consistent. Katherine is brash, headstrong and doesn't make the wisest in the moment decisions. But she is a leader and I think a good captain (as she can listen to her crew that hopefully can counterbalance her headstrong nature). She does everything with good intentions.

James reminds me a bit of an old school hero. He isn't all rapey or anything like that, but his alphole tendencies are a bit prominent. He seems to be a walking erection when around Katherine and makes extremely dumb choices about her. Like really dumb. But he is caring around Anne, Katherine’s child, and genuinely seems to care about people. I liked him more in the former half then the latter though, which is usually opposite of the way things go.

This book really is saved by the amazingly interesting secondary characters. The entire crew is pretty much made of up nobles. We have the first mate whom if I remember correctly is an earl, and the friend maiden aunt lady with her niece also ton. I think the lady doctor is ton as well. It really threw me for a second. A lot of “historical” romances are anything but truly historical, but even in this sort of alternate history there are some limits. The chances of that many titles being on one minimally manned ship are super rare even for romance novels. Thus I took to calling this in my head alternate alternate history.

I do have to mention the daughter, Anne. While not too noticeable, she does come off a bit plot moppet like (a child really only there to further the plot). She wasn't around for too much main page time, but I thought I should mention it just in case plot moppets are your reading peeve.

Anyway the secondary characters really shine. They all have great personalities and jump off the page. Though as I write this, I wonder if I liked them more because I didn't have to spend so much time in their heads. I wonder if when I get to their books if I will start to dislike them, too. Oh, well. That is a problem for future me.

The Romance
Well, we know I didn't really like either lead all that much, but their romance was passable. I wish some of the ending didn't go down the way it did, but it actually felt consistent with their characterizations.
I felt like I would have really liked i t if they spent more time together. The time they did spend was filled with lustful gazes or paragraphs of wishing they could jump each other. I wish it was just more of them being people not potential partners, if that makes sense. But I think they suit each other and I enjoyed the tension and all that.

The Execution
This book entertained the hell out of me. It was a book that I read in a day, one that I just could not put down. The concept was unique and fun, the characters were funny, the story flowed really well. Like I mentioned earlier the ending seem to drag and the leads were a little annoying at times. But I enjoyed the book, and that’s what matters.

The Overview
Overall I liked it. It was a fun story filled with fun characters and a unique plot. I wanted more high seas and less callbacks to an old school time, but what I got wasn't bad. I was entertained and will continue to be entertained because I will definitely be continuing on to see what happens in the next book. I actually think I’ll get my wish of most of the story being on a boat. I can’t wait! A Gentleman 'Til Midnight is a wonderful debut from an author that I am sure to follow!

This ARC was provided to me from the publisher in exchange for an honest review.

Edit: I apparently forgot to give this a star rating! Ha. Four stars on the TB&TB scale.
Posted by Julia at 12:30:00 AM