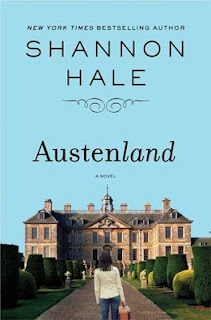 Title/Author: Austenland by Shannon Hale
Publisher/Year Published: 2007 by Bloomsbury
How I got this book: I got this from the library
Why I read this book: This is another one for the Smart Bitches, Trashy Books bookclub. The book discussion is this Thursday and it's a really fun time if you care to join :)
Rating: 3.5 stars


Jane Hayes is a seemingly normal young New Yorker, but she has a secret. Her obsession with Mr. Darcy, as played by Colin Firth in the BBC adaptation of Pride and Prejudice, is ruining her love life: no real man can compare. But when a wealthy relative bequeaths her a trip to an English resort catering to Austen-crazed women, Jane's fantasies of meeting the perfect Regency-era gentleman suddenly become realer than she ever could have imagined.

Decked out in empire-waist gowns, Jane struggles to master Regency etiquette and flirts with gardeners and gentlemen;or maybe even, she suspects, with the actors who are playing them. It's all a game, Jane knows. And yet the longer she stays, the more her insecurities seem to fall away, and the more she wonders: Is she about to kick the Austen obsession for good, or could all her dreams actually culminate in a Mr. Darcy of her own?

Review:
First I am going to come out and say it. I still have yet to read Pride and Prejudice. Or really any Austen. What I know about her and her books consists of what my professor and I chatted about walking around on the Roman Forum on a high school trip to Italy, the movieThe Jane Austen Book Club, some Jane Austen TV movie that I feel like I may have seen but can't remember the title, and of course the Pride and Prejudice movie and BBC mini series. So I mean I have a lot of secondary sources, but I have yet to read her words and have them wash over me to take me to a time where men were gentlemen and women were future wives.

That said, I thought Austenland was a cute book, but I am not in love with it. Maybe it's because of all the things mentioned in the previous paragraph.

Jane, our heroine, is a women in her early thirties who has had the worst luck we relationships. Each chapter actually opens with a small paragraph outlining them. They are really the pits. She partly blames her lack of luck with her secret obsession with Colin Firth as Mr. Darcy. Nothing can compare to that, can it?

Well she gets the opportunity through a series of events to go to this rich people Disneyland called Austenland. They take your oodles and oodles of money and in trade you get three weeks of the full pre-air conditioned, corseted, sewing all day Regency experience. She opts to go to get rid of her silly obsession once and for all. Most of the book chronicles her time there.

Most of the people there in the house she is staying at are paid actors there to give the experience authenticity, but there are at least two other women who paid for the experience and are also guests.

Now that I summarize it the plot is rather dull, as I suppose country life would have been at that time. She gets herself two "love interests" and is all in a tizzy about her life for most of the book. It is interesting to see how much the people playing this world take it seriously. Like it is a Big Deal when anachronistic things happen. They are Regency down to the underpants or lack of them.

The romance itself was nice, I guess. Nothing super steamy and nothing super dull. I enjoyed the paralels in all of the characters to what I know of P&P. I didn't get any other references to things like Emma if there were any.

Overall it was a quick, light jaunt into the world of one woman as she tries to find out who she is and stumbles into a strange scenario in the process... trying to figure out what is real and all that.

If you like light romantic romps into the past, this would probably be right up your alley. There is some fun twists and I did get caught up in the story a bit. I definitely don't regret reading it, but I don't think I'll be reading the sequel.

There is one more thing. It has absolutely nothing to do with the plot or the characters but one itsy bitsy line near the end that talks about kissing on an airplane all the way from London to New York. In Coach. On a plane that is rather crowded. As a frequent airline traveler, I only have one thing to say.

PS: Jana has also reviewed Austenland and gave it five stars. Check out her review from July 2010!
Posted by Julia at 8:47:00 PM