With 2012 ending and 2013 soon beginning I have been thinking a lot about beginnings and endings -- in my life currently ( friendships ending, a new & exciting life beginning as a newlywed) but also I've been thinking about some of the series that will be coming to an end in 2013 and ones that  I'm REALLY excited about that will be released in 2013.

True story: I have Requiem in my posession and I'm honestly too afraid to start it. This is the  LAST book of this trilogy and I am beyond nervous. I just can't even.

I haven't yet read The Crown of Embers but plan to soon but I do know The  Bitter Kingdom comes out in 2013 which will conclude this trilogy. I'm exciting because this is a series that is really getting me into fantasy!

The end of the trilogy is slated for 2013 (I'm assuming Fall since Unravel Me  is early 2013) but I really love Tahereh Mafi's writing and totally didn't expect to love this book as much as  I  did  because it was SO hyped up!

I feel like this series has been a bit underrated.  I mean, the Furies are crazy and make things  very interesting. I just really have enjoyed this series SO MUCH and I hear it ends in 2013.

I flew through Eve (despite having some problems with it) and could picture  the world so clearly in my head and that ending of Eve! WOW. I still need to read Once but when I do I'm sure  I'll be excited for the conclusion.

This series is so addictive if you like fast paced mysteries with a bit of a supernatural twist (she can hear  the echos of  people who have been murdered) and romance. Book 1 & 3 were my faves so far but they way everything was shaping up at the end of book 3  I'm SO  EXCITED/NERVOUS for the conclusion.  I hope the creep factor is there in Dead Silence like it was with The Last  Echo!

I cannot wait to read Sever!  Lauren's writing is so mesmerizing and I can't wait to see how some of these plotlines wrap up!

What a crazy story this one is! I still have yet to read book  2 but I think I want to  wait until book 3 is closer to publication with this series.  Mara Dyer is pure WTFery mindefferey at its glory. I didn't  LOVE ( I liked it)  MD1 like others did but there was something about it that makes me HAVE to know what happens. 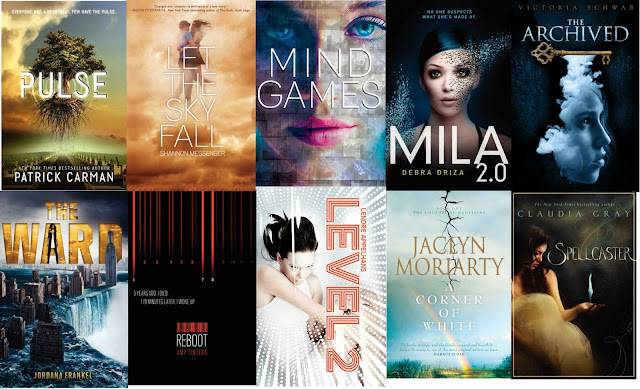 Pulse by Patrick Carman: I just received this in the mail and I'm really excited about it -- mostly because I dream of  the day when I can move things with my mind. Umm, hello house getting clean while I read.

Let The Sky Fall by Shannon Messenger: I'm  planning on starting this soon but I heard about it during BEA and it sounds awesome. Plus I met the author and she was  really nice so it  makes me all the more excited!

Mila 2.0 by Debra Drizer: Definitely wanting to start this soon! I've been digging sci-fi lately and I'm hoping this will be everything that Eve & Adam wasn't for me. I just have so excitement  for stories where the MC was a clone or created in a lab!

The Archived by Victoria Schwab: Coolest concept I've read about in a while! Dead  people end up on shelves like books in a library? I love super imaginative books and I am SO SO SO  excited!

The Ward by Jordana Frankel: I've  been excited about this book since I featured it on my Catalog Creepin' post! It's especially chilling since, after Hurricane Sandy, we saw a Manhattan that was under water.

Reboot by Amy Tintara: I'm so intrigued by the idea of people becoming "reboots" after they die in this novel!

Level 2 by Lenore Appelhans: Already read this one and I'm so excited about it! My review will be up on The Perpetual Page-Turner within the next few weeks.

Corner of White by Jaclyn Moriarty: All I saw is "genre-busting" and that excited me for some reason. I'm excited about books that take place in parallel type worlds so yay!

Spellcaster by Claudia Gray:  I had been  thinking I needed a  good witch book and then this little beaut showed up!

Taken by Erin Bowman: A world where boys are taken and disappear into thin air when they turn eighteen?  Sounds so intriguing!  Especially when the MC, a boy days away from his 18th birthday, finds a note from his mother that makes  him question things!

Icons by Margaret Stohl: I want to know why the heck people dropped dead, why some people survived and what the heck the Icon is!!

The Program by Susanne Young: This is the one I'm probably MOST excited about because it just sounds sooo good and I liked A Need So Beautiful by this author (still need to finish the series). Teen suicide is an epidemic in this world and anyone  showing  signs of depression get sent to "The Program" -- the only proven way to   "help" the teens.

The Rules by Stacey Kade: Clearly you see a trend of me being excited about books where people are made in labs? But this MC is made from human and extraterrestrial DNA so um THAT sounds even  more cool and the summary of this book has a hint of a Roswell feel  to it (I LOVED ROSWELL!).

Email ThisBlogThis!Share to TwitterShare to FacebookShare to Pinterest
Labels: book series, new YA series in 2013, series that are ending in 2013, YA book series