Tahleen reviews: "I'll Be There" by Holly Goldberg Sloan 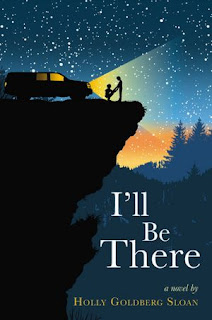 Sam Border has only known what it's like to run. He hasn't had stability since he was a very young child, and ever since his father took him and his younger brother Riddle when they were small they've always been looking over their shoulder for whoever is after them, usually the authorities. Their father is a thief, going against the system and trying to cheat it as often as possible, and uses his sons to get pity from those he tries to swindle. All Sam can do is make sure to take care of his brother as best he can. But all this changes when he meets Emily by chance after a church service, after she seems to sing a song straight to him. He begins to want to stay, to be a part of another person's life. But he has a major obstacle: his paranoid and abusive father, and his worry for his brother.

I read this book a couple of weeks ago, and I have to say I had to stay up reading it until I was finished. Some of you may know this doesn't happen too often to me. It turned from love story, to family story, to survival story, and I needed to know what happened to each character.

I must say the characters were very well crafted and developed. Sam is unsure of this new pattern he has started, and has a fierce loyalty to Riddle. He is tender and caring but knows what needs to be done and does it. Riddle is a quiet, suffers from asthma in silence. He draws complex images of the insides of machines in a phone book as a way to cope. He craves love and gets it from Sam, but wishes for the love of a mother too. Emily is a fairly typical teenage girl who doesn't understand what it's like to live in poverty and can't wrap her brain around Sam's situation, doesn't even consider that such a life could be possible for this boy. Her whole family becomes important to the story, and each is individual and fleshed out.

The story itself is gripping and full of tension, especially when it comes to how Sam and Riddle's father reacts as it is clear he is mentally unstable and we are unsure how he will react or take action when he thinks he's being double crossed or tricked.

I'll Be There is a heartwarming and lovely story survival, hope, and promise.

Disclosure: I got this book from my local library.
Posted by Tahleen at 12:30:00 AM