Tahleen reviews: "Ten Things We Did (and Probably Shouldn't Have)" by Sarah Mlynowski 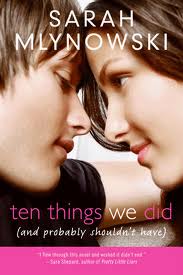 When April's dad and stepmom drop the bomb that they're moving to Cleveland, she can't even begin to comprehend or accept it. In fact, she'll do anything to stay in Connecticut, where her friends, her school, and her boyfriend Noah are. The problem is, her mother and brother are all the way in Paris and there's no where else she can stay. Well... except for her friend Vi's place. Where her mom will be leaving her unsupervised for the semester since she got the leading role in a traveling production of the musical Mary Poppins. All April has to do is tell a few little lies. But there are definitely some things she wasn't expecting to happen, like getting a hot tub, adopting a kitten, throwing the biggest party ever...

When I saw this book was only 99 cents for my nook, I knew I had to take advantage of that. I'd heard great things, and this book didn't disappoint. I couldn't believe some of the things these girls did, or that they had the guts to do them—at some points I was actually a bit upset at their decisions. But overall it was a fun book that had a lot of serious moments and issues teens deal with on a regular basis. Well, besides the whole living without guardians thing.

I loved that this is sort of a framed narrative. It starts off the morning after the big party, with April getting a phone call from her father saying he's 15 minutes away from the house to surprise her for her birthday. Needless to say, she is very surprised and goes into panic mode. Then we cut back to right before New Year's Eve, when we find out her father is leaving. The rest of the book goes through the time they are without parents, with a twist following the scene where the book started. I loved this.

What I'm most impressed with is how Mlynowski handles sex in her writing. April loses her virginity (one of the 10 things), and the way Mlynowski writes it is not only completely believable, but probably pretty normal. I was incredibly impressed with how responsibly she treats the subject—April and Vi both go on the birth control pill to start, use condoms, etc. Yet Mlynowski makes it clear that there can be consequences to sex, both emotionally and physically, and for that I am grateful that this book exists. I can think of a few people who should have read this.

*kind of a spoiler*

I also really liked how April tries so hard to manage her love life and do the right thing, even though she is starting to have feelings for her friend Hudson and it's clear he likes her too. She stays loyal to her boyfriend, but there is that thought in the back of her mind that maybe she would be happier with someone else, especially when Noah starts to act differently toward her.

Overall, this was a quick, fun read that teens can easily relate to, despite the abnormal circumstances. I would certainly recommend this to teens, as well as those of us who read young adult novels well into adulthood.