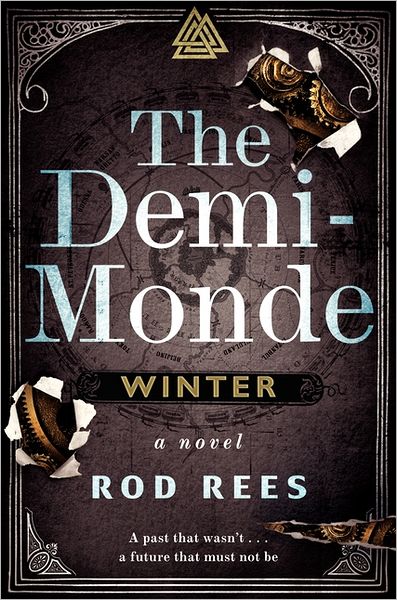 Book: The Demi-Monde by Rod Rees
Publisher: HarperCollins 2011
How I got it: Received an ARC copy

I got this book a few weeks ago and I just finished it the other day. I wont blame it being a slow read on the book completely - there were holidays going on and I had life and work distracting me. Sadly with life being frantic, every time I looked at the book sitting on my bedside table, I sighed. Anyway- on to the review.

The Demi-Monde: Winter is hard to classify genre wise. I'm not sure if it should be considered Cyberpunk or Steampunk, although it is certainly dystopian.
The premise of the novel is that in the Real World, the military has created a computer simulation to help prepare soldiers for war. Once you're hooked up you are completely immersed (think similar to the Matrix). The world you are sent to in the simulation is the Demi-Monde, which is a world filled with all of history's baddies, and so it constantly on the brink of war. However, one of these baddies has retained some of his old consciousness and wants to get out - so he steals the President's daughter and holds her hostage in the Demi-Monde. So the government finds Ella and promises her a lot of money in order to enter the Demi-Monde to save the President's daughter.

I thought the over all concept of the novel was pretty cool. I love history, so the idea of bringing a lot of history's evil psychopaths together was highly entertaining for me. And what you get is a world filled with a lot of hatred, persecution and oppression. And you have a lot of revolutionaries trying to fight the system who become just as crazed as they tyrants they are against (i.e. the character Trixie Dashwood)

I enjoyed the main character Ella, she is thrown into this world with no briefing what-so-ever and just runs with it. She has a lot going against her in this world: A. being a "shade" (being black) and B. being a woman. But she is unstoppable (mainly because she wants to get out of this awful place) and it's really fun to see what plans she comes up with to try and save Norma.

The only thing I found irksome in the novel was the lack of established time period. The military says that they stopped the technology at around 1890, so you have a steampunk aspect to the book, but then you have sections of the world that seem to exist in the 1920s and others that seem stuck in the Tudor era. I understand that since Rees was throwing characters from all over the time spectrum together things like that might happen, but it was just really hard to imagine what people were wearing and how they should be behaving. That might have been one of the reasons it took so long to read, because his world building wasn't quite complete.

I am looking forward to the next one and hopefully little quirks that didn't quite work in this one will have been worked out. Overall: 3.5 stars
Posted by Paula A at 9:53:00 PM