Blog Tour: At the Mercy of the Queen + giveaway 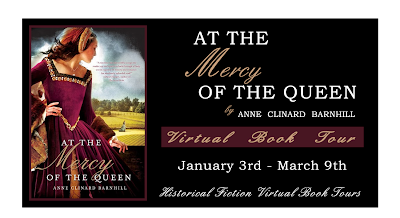 About a year ago on my personal blog, I pondered a scenario that most Tudor-fanatics have come across. We are constantly inindated with books about either Henry VIII or his six wives - and that's it. Where are all of the other people? The families, servants, and friends were there and can certainly offer up a fresh new viewpoint to the well-known stories surrounding Henry and his queens. At the Mercy of the Queen does a great job of this, re-hashing the frequently told story of Anne Boleyn from another perspective.

Margaret Shelton, also called Madge, is sent in 1533 at the age of 15 to become a lady-in-waiting to her cousin, Anne Boleyn. Since they are family, Madge quickly becomes one of Anne's favorites and a close confidante. Madge is historically famous for being thought to be the cousin that Anne Boleyn offered to Henry VIII as a new mistress - a mistress that Anne would have under her control and grasp. In the book, this is a major struggle for Madge. On the one hand, she wants to please her queen, who is quickly losing Henry's favor, by singing her praises to the king. Yet on the other hand,  Madge is in love with Arthur, Charles Brandon's bastard son. I personally could not ever imagine being in this scenario and willingly putting up with Anne's schemes. Just as a side note, I kept picturing Henry as the one portrayed in show The Tudors - we must realize that the real Henry was a large, gluttonous man with a festering leg wound. Not even close to Jonathan Rhys-Meyers. This was another factor in Madge's reluctance.

Even though this was Madge's book and story, I still feel as if Anne Boleyn was the main star. All of the decisions, outcomes and storylines revolved around her. I suppose it is hard to write a story about a minor player in the Tudor-era without having the notariety of someone such as Anne Boleyn play a large part in it. Madge's thoughts and personality were still intigrated very well; it still fit the bill as a refreshing look at Anne Boleyn's story through someone else's eyes. The book overall was well written and interesting - I finished the book in one day, I couldn't put it down! At the Mercy of the Queen also made me look at several people very differently, Henry Norris and Jane Seymour in particular. In this book, neither are the kind, easy-going characters we are used to.

Of course, I highly reccommend this book to other Tudor-lovers, but I also know that general historical fiction readers will enjoy it as well. As this is her first novel, I am excited to see what else Anne Clinard Barnhilll will write about!

Giveaway!
As I will be moving in a few months and am looking to downsize my book collection, I am giving away my copy of At the Mercy of the Queen to one of you! Just fill out a simple form here to enter.
-Open to US residents only
-You have until January 23 to enter!