***WARNING***
While I'm sure a lot of you have seen/read it, I'll try not to put in spoilers, but I'm not gonna lie, it could be one slips in (sneaky little things those spoilers..).

Anyway: This is one of those series of books and now a TV series as well that a LOT of people are talking about. If you've followed this blog since the beginning, you might vaguely remember that I reviewed the first book A Game of Thrones right here on The Broke and the Bookish. This book blew me away with its epic fantasy awesomeness.

I was really excited about the fact that it was going to be made into a TV series, because my boyfriend doesn't really read (though I have to give him credit, he's trying) and I want to share the things I love with him. So this was perfect.

And I have to say, though I'm often complaining about the lack of consistency between print and screenplay, this adaption is AMAZING! It is SO good! Of course, there are still some things that are different/left out, but overall, it's pretty true to the book. LOVE!

But let's talk a bit about the differences: I've recently discussed this book with Kelly (because I managed to bully her into reading it, YAY!) and we noticed that the characters in the TV series are a LOT older than they are in the books. I had to look their ages up, because it's been a year and I wasn't really sure anymore. But Jon and Robb are 16 I believe (could be 15). 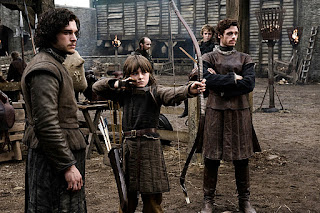 These two gorgeous boys (though obviously not including the one in the middle, cause that would be kind of gross) are NOT 16 (or 15, either). They are in fact 24 and 25. Which makes me happy. Because seriously, I would feel like a creep making goo-goo eyes at Jon if he was 16. So YAY!
And in real life, the actress playing Danaerys is 23, which makes the nude scenes more acceptable.

Researching this, I read online that the creators chose for older actors because they feel that in the middle ages, which is about right for most epic fantasy, you didn't really have teenagers. At 16 you would be of age, and in the time of Henry VIII as a girl you'd get married of at about 14, so I think they're pretty much right about this. It also feels right that the characters are older, they do some incredible things, especially Danaerys at age 14, I mean, becoming queen? That's huge!

I know there's a lot of nudity in the TV series, in the books as well, so I think this is probably best reserved for a slightly more mature audience (yes, I said mature, cause age is not always related to this). And some of it made me cringe a bit, but that's just me. I didn't feel like all of it was unnecessary, though there are some scenes, if you've seen it you probably know what I mean (the two girls in the brothel), that I could have easily done without and I'm not even sure the one I mentioned was in the book to begin with.

I do want to give the producers major props for the awesomeness that is the whole setting! It's pretty much how I pictured it in my head and everything looks amazing and real! With fantasy, you can often go tacky in how you film it, but here it's done absolutely right. And the cast is so well done! I LOVE Sean Bean as Ned and I'm so sad he won't be in the next season! I actually miss Ned all around, which is why I haven't started the second book yet. Gosh, he was such an amazing character!

There were some characters I liked better in the TV series than the book, namely Tyrion. Tyrion has a pretty big fanbase based on the book, but I really started warming up to him in the series. Peter Dinklage is awesome.
And OMG, Syrio! LOVE! And Robb, he's much more likable in the TV series, though I can't quite put my finger on why that is. I even liked Cersei better, I saw the scared mother in her and also **SPOILER, light up to read**how she didn't want Ned to be executed, which made me like her better. And I'm sad to say I liked Bran less in the TV series than in the book, he seemed sort of blah to me.

But my favourite characters remain Ned and Arya. And Danaerys.

So that's me gushing/discussing this series. Have you seen it? Excited for the second season? Read the book?? Or ALL of them? I've been lucky enough to win all the copies recently, so I'm dying to dive into my pretty books.
And for those who haven't read/seen it: HIGHLY recommended!! (in case I wasn't clear before ;) )
Tell me what you think: agree/disagree? Things I haven't mentioned? Let me know!