Kimberly's Review of the Book Thief 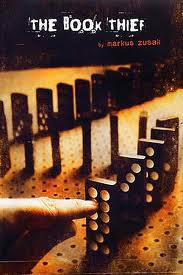 Book: The Book Thief
Author: Markus Zusak
How I got it: Bought it at B&N
Why I read it: I read just about anything I can get my hands on about WWII
Rating: 5+

*sigh* I don’t think I have ever struggled more to write a review for a book. Ok… Where can I start? I picked up the book because 1. I liked the cover 2. I’d heard good things about it and 3. The book was narrated by Death, I was intrigued immediately.
Whoever thought that a book would come along with Death as a narrator, and not only that, you’d feel sympathy and a connection to Death? To top it all off, Death has a heart and a snarky sense of humor. “I like this human idea of the grim reaper. I like the scythe – it amuses me”. Even though the narration was told at a distance I felt a deeper connection to the characters than I would have if it had been simple third person narration, or first person from one of the main characters.
And oh the characters. They are wonderful. The relationships that Liesel has with the people in her life… They are beautiful. From her foster parents, to her best friend, to the man she helped, to a shattered woman who had passed her days wandering around her home like a ghost. Each of the relationships were wonderful. I came to care for each and every one of the characters as deeply as Liesel.
As for the writing… it’s… (I can’t seem to put this into words! Ironic, no?) The writing is quite beautiful. Normally I’m a fast reader, I can read a 300 page book in a good day usually. The Book Thief is 550 pages. It took me over a week to read it. I kept finding myself slowing down so that I could enjoy the way sentences flowed and the descriptions and the imagery that Death conjured up. One might think that with the book being narrated by something as strange as Death, that the descriptions might be odd or difficult to understand. It was the opposite. I had many moments when I would read something and then think “that’s so true! It does look like that!”
After I finished the book I slapped it into the hands of every person I could. I had to spread it around. I was so moved by it that I wanted others to experience it too. My copy of the book is quite worn now. The cover has a bend in the corner, the pages are scuffed, but for once I really don’t mind. (I’m usually extremely picky about the condition of my books.) My copy alone has been read by at least 10 people. Makes me happy to know that it went so far.
I can’t really think of much else that I can say about the book. Only one thing, and it’s a bit of a spoiler, but not really. The closing lines of the book gives me chills every time I think about it…
“I am haunted by humans.”
So what about you? For those who have read it, what did you think?
What were some of your favorite parts? A favorite passage or paragraph?
A favorite character perhaps?
Tell me your thoughts on this book! Obviously it impacted me strongly enough that I can’t even sufficiently put it into words.
So…. What did you think? 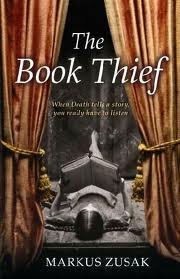 (Oh and I just stumbled across this cover
when I was getting read to post this. Isn't it
beautiful? I like it even better than the one I have...)
Posted by Kimberly at 10:08:00 AM