by Anna Godbersen
Published: Harper Collins, 2010
Where I Got It: The library
Rating: 4.5 stars 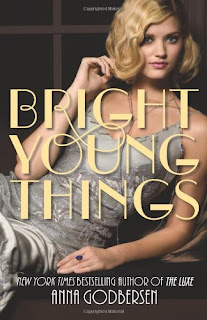 This may just be my opinion, but there is simply a major shortage of good historical fiction set in the 1920s. I've searched far and wide but have only found a measly number of books set in this fascinating time period. Bright Young Things

is a star amongst these and in Anna Godbersen's usual fashion, the cover is simply fantastic!

Letty and Cordelia are small town girls who escape from rural Ohio for New York City. They want to start new lives: Letty aspires to be famous and Cordelia desperately wants to find the man she thinks may be her father. They become separated not long after their arrival in New York and each take very different paths over the next few months.

Cordelia is accepted back by her father who, as a very rich man, introduces her to a life of privilege and class she never could have imagined. Astrid, Cordelia's new brother's girlfriend who is hiding some secrets, also comes into play. Letty, on the other hand, is struggling to make it as a cigarette girl, a take-off point for her wishes of being famous. Death, love, betrayal, and fabulous historical imagery follow, all beautifully written.

I'll admit that Letty and Cordelia's initial fight that led them to becoming split up for the majority of the book was hard to believe. They've been best friends for years, how could a little argument, especially when they've just arrived in an unfamiliar city, cause them to leave each other so quickly? Also, Cordelia's father immediately accepting her into the family made me a bit suspicious if he was up to something.

Even if you aren't into historical fiction, I guarantee this story will draw you in. The characters are all so memorable and fun to follow, you'll be yearning more for the plot than the time period. I can't wait to read the next in the series!

Also, if you have any recommendations for books taking place in the 1920s, please share them with us in a comment!
Posted by Kelly A. at 8:09:00 PM