Unless you live under a rock, you surely know what today is.  :)  When news of the impending revival was released, it went like wildfire through many a friendship circle.  My very good friend and I decided to watch it together.  In true Gilmore fashion, we planned our food.  I added food to it (I'm getting to double dip a bit because my boyfriend's family is coming into town later today and I needed to cook for them anyway).  I decided to write a post about it and update it as we watched or until I got too drunk to continue updating it.  This post will include food eaten, books referenced, and NO SPOILERS!  It will likely hold general impressions, like "After this episode, I was left feeling..."  But DO NOT WORRY about me blowing major plot points.  If you are commenting, I ask that you kindly do the same. 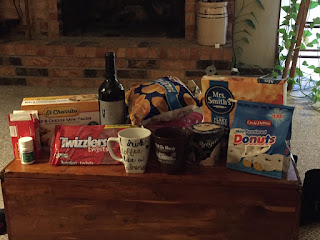 The revival experience began last night.  My friend met my boyfriend and I at my uncle's house for some post Thanksgiving meal drinking.  We ran to a grocery store on the way back to my house for her portion of the food.  We watched some football.  I continued drinking.  Then my lovely boyfriend said he would excuse himself so we could watch a couple of episodes.  We each picked our favorite episode.  I chose season one's "Love and War and Snow," while she picked "They Shoot Gilmores, Don't They" from season three.  Then we watched the finale.  We wrapped it up around 1:00am.  The new episodes wouldn't drop until 3:00, so we decided to go to bed for a while and wake up at 7:00.  I'm up.  I got me some water and some allergy meds.  I'm ready to go!

The last time we saw Lorelai, Rory, and the gang, I was just finishing up my freshman year of college.  I totally felt Rory's sense of "OK, now what do I do?"  However, during the entire run of the show, I felt like I could relate way more to Lorelai.  The daughter who had to do things the hard way.  Anyway, I finished college, went to grad school, took a year off, and started law school (currently in my second year).  From what I've seen of the previews for the revival episodes, Rory's is feeling completely adrift--it looks like she's between jobs, not in a relationship, feeling rootless, like she's just marking time.  I TOTALLY GET THAT!  I always thought that by now I'd be way more settled down and rooted.  So, it's odd, but maybe in this revival, I'll relate more to Rory.  We shall see.

OK.  So, my friend, Kelly, is up.  Finally.  We're about to get started.  I'm still not ready for food.  But I have an awesome looking breakfast casserole waiting for me. 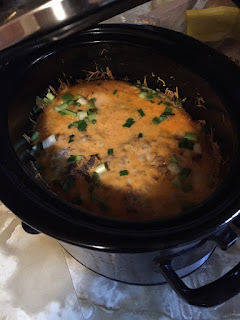 It was weird seeing everyone again after so long!  But it also felt like coming home again, in a way.  The first episode is "Winter."

Books Referenced:
Adventures of Huckleberry Finn
Leaves of Grass
On the Road
The Life Changing Magic of Tidying Up

Not as many books as I would have thought!  But these are good ones.

It took a while before I was awake enough to eat food, but I managed to scarf down some donuts.  Then I moved onto the breakfast casserole.  Super yummy!  I highly recommend the recipe.

We've both expressed some level of disappointment that now the revival is 25% over.

Quick bathroom break, then onto the next episode!

"Spring"  Ah!  This episode!  This is what I was talking about!  I love how it's all coming together.  And now we're sad that it's half over.

So many more books this episode!  And I love the authors.  This is shaping up to be a pretty good reading list.  :)


I guess we are on to summer!

Books Referenced:
Wild
Anna Karenina
Games of Thrones
The Godfather
Edward Albie/Who's Afraid of Virginia Woolf?
Nora Ephron/I Feel Bad about My Neck: And Other Thoughts on Being a Woman

Food Eaten:
Not much.  But I did make a pot of chili.


Overall, I think there was a pretty good reading list to be gleaned from the episodes.  But there weren't as many books as I would have liked.  Nor did they reference some really good recent picks.  I was kind of surprised by how many classics were mentioned.

I'll have to watch the episodes again to see how many books I missed!
Posted by Unknown at 8:43:00 AM