Ten Facts About Us

Ten Facts About Us (bookish or just general about you facts or ten facts about you as a blogger...whatever you want)

If you were around when I started contributing to this blog over a year ago, then you already know what I'm about to say next...

1. I am OBSESSED with tattoos.

I've affectionately dubbed myself The Tattooed Biblio and most of my tattoos are book related. Here's a short recap of a few of my favorite tattoos.

The quote on the skull is from Victor Hugo's Les Misérables that reads, "It is nothing to die. It is frightful not to live." Another quote on my inner arm is from Margaret Atwood's The Handmaid's Tale that reads, "Nolite te bastardes carborundorum," which is mock-Latin for "Don't let the bastards grind you down." Lastly, there is a quote on my back from Kurt Vonnegut's Slaughterhouse-Five reading, "Everything was beautiful and nothing hurt." 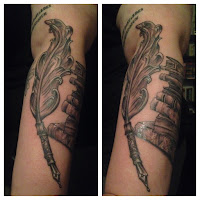 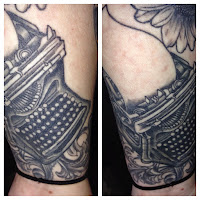 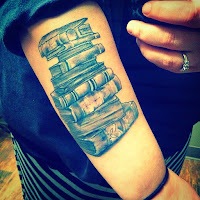 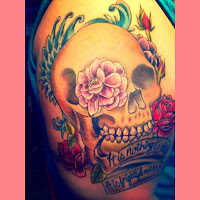 I have one of the most adorable/dingus dogs ever. His mom was a regular sized dachshund and his dad was a mini dachshund. (How in the world did that work, right?) Put those two together and this is what you get... cuteness overload with a flair of goofy. His name is Emmitt and he enjoys licking the boyfriend's face like a popsicle, making bold leaps onto furniture (missing completely about 80% of the time), and acting like a big dog. 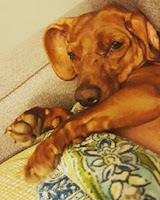 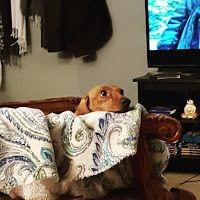 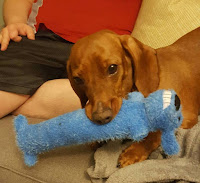 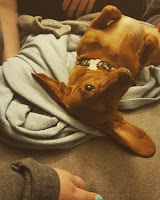 3. My summer has been SUPER ACTIVE
This summer has been crazy for me with getting back into playing multiple sports (softball and sand volleyball), but instead of juggling it with like homework and middle school activities, I am juggling it with work. I travel a lot for my job so running these two leagues is sometimes challenging. Do we have enough people to play tonight? Yes. Awesome.

We have one more softball game tonight before the end of the year and are just wrapping up our first sand volleyball session. I like the volleyball because 1) sand evens out people skills usually when it comes to speed and jumping, both of which I suck at.  2) It's at a bar so I can drink and play which makes diving all the more fun.

Also Pokemon Go? Yeah, I walked all over the place this weekend trying to catch 'em all. Including my local library :)

4. I'm currently planning a trip to Paris and Rome
This fall can't come soon enough with this trip on the horizon. My friend and I like to plan vacations and never take them, but this time we are actually going. I am so excited but sort of freaking out that all we have books so far is the airfare to Paris and from Rome. Nothing in between and no hotel accommodations yet...

If anyone has any tips about either location, let me know! Must see place, best areas to stay, hit me up in the comments!

5. I'm a doctor
I'm not really sure if people on the internet know this about me, but I'm a GP in training and have been working as a doctor for 4 years now (I just realised it's been 4 years, wow), 2017 will be the year in which I finish my train and will be a full grown GP :)

6. I'm finally working out regularly
I'm not a person who particularly enjoys working out. I've been going on and off with it for years, not working out for long stretches of time, diving back in and getting burned out on it again. BUT ever since I got home from our vacation in Thailand last year (in which we were not as active as we usually are and did eat as much as we normally do on vacation, which is slightly more than at home), I decided it was time to get it together and now I'm basically working out 2-3 times a week, doing pilates at home. In the beginning I followed Cassey's monthly calendar on Blogilates and now I've switched to her PIIT28 program, which is AWESOME.

7. I went to Croatia this year
And guys, it was AMAZING! Seriously, it's such a beautiful country! They had lovely old towns, gorgeous nature parks where we went for long walks, great food, nice people. Basically all things I love to have when I'm exploring a new to me country!
And also, they have Game of Thrones. After we already decided we wanted to go there, we discovered that actually a lot of GoT is filmed in Croatia, they have King's Landing there and we did an awesome tour walking around Dubrovnik and seeing all the sights that were used in the series and having our very own battle with Longclaw and Oathkeeper. Oh AND I rang the bell that was used in the walk of shame, it was SO much fun!

8.  My mom named me after Jamie Lee Curtis
No joke. I mean, it was the 80's. And yeah, my full first name is Jamie Lee. I don't have a middle name. Let me tell you how fun that has been my whole life trying to explain to people. "No but really what is your middle name?" I DO NOT HAVE ONE. Sure, Lee seems like a middle name but nope it's not. It's part of my first name.

9. I hated my husband when I first met him

You can read more about it here but TLDR I hated my husband when I met him but also tried to hook him up with my sister because I thought he was way more her type? lols forever. It was fun for her to talk about that when she gave her maid of honor speech at my wedding.

10.  I just spent 4 days faux parenting six children and two dogs and I'm bone tired
My sister just gave birth to my baby nephew and was in the hospital for a few days because of her c-section so I packed my dog Finn and myself and went and watched their 6 kids for 4 days -- with special appearances by my husband for half that time. It was actually really fun to hang out with them for an extended period of time but oh man am I bone tired. I did it before for a week when they went on their honeymoon and I forgot how I wanted to sleep for a week after it. The kids range from 2 to 17 so luckily the older kids helped out too so it went smoothly and there were no disasters but OOF I WANT TO SLEEP FOR A WEEK. But so excited for my new baby nephew and I'm happy I could be there for my sister and her husband to help out/spend lots of time with the nieces and nephews. Plus it's fun to be the fun and cool aunt who lets the littles stay up late and do all the fun things. Mwahaha. Being an aunt is the best.


Can't wait to get to know you all better with your facts about YOU!