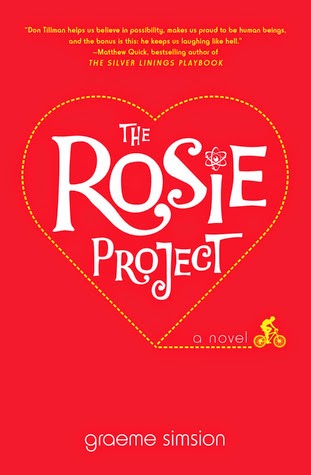 Title/Author: The Rosie Project by Graeme Simsion
Publisher/Year Published:  May 2013 by Simon and Schuster
How I got this book: I own the eBook
Why I read this book: Lots of people in the romance community loved this book. It has been on my to read for a while.
Rating: 5 stars

Every once in a while there is a story that you keep hearing about. Maybe it was something that didn't catch your eye right away, but the buzz surrounding it make you curious. That was this story for me. I was seeing five star review after five star review, so I finally decided to take a chance.

The Rosie Project is a story about Don Tillman, a professor in genetics who likes his life just so. The story is told from his first person POV. Through his eyes we meet his two friends and hear stories about his not quite the norm life. Though I don't believe ever explicitly stated, Don suffers from Aspergers. Once a woman who he considered a friend told him that he would make an excellent husband. Figuring it was already out of the cards for him, he never really did anything about it until he gets an idea for something called The Wife Project. He devises a survey that he links on his online dating profile that there are a correct set of answers to. This way he doesn't have to waste time with all the face to face nonsense.

There is a wrench however. Rosie. She is a friend of a friend who fails the survey with flying colors, a smoker, always late, things that Don is against. But he ends up helping her with a project to find out who her birth father is through a series of collecting DNA from unsuspecting men and testing for a match. And through that process everything that he has come to think about Rosie and his own Wife Project gets shuffled.

This book was a real surprise. I didn't think it would live up to the hype for me. For one, the characters of Rosie and Don are great, very dynamic and people I can see living in the real world. The plot itself has an amazing flow. I was able to just allow myself to be sucked away into the story. The primary story is the burgeoning romance, but the secondary find my dad story is great, too (though I did figure it out).

This was such a refreshing read that I think will appeal to all those who like a story with some romance and unique characters. I don't think it is just for people who like chic lit or romance novels. It's a great story that has a lot of things that make you think along the way, especially with how the story comes to it's conclusion. I don't want to spoil anything but there was a scene in a restaurant that I was very surprised went down the way it did. It made me need to keep reading to find out how everything was going to work out in the end (was it going to work out in the end?! Ah!).

The pace is a good one and I was able to finish this on one 4hr flight. If you like a beautiful story with a dash of love and humor, check this one out. It was one of my favorite reads of the year so far.