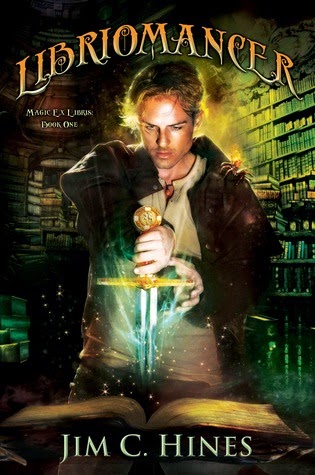 Title/Author: Libriomancer by Jim C. Hines
Publisher/Year Published:  Aug 2012 by DAW
How I got this book: My sister owns the book, so I borrowed it
Why I read this book: How freaking cool of a concept is this?
Rating: 4.5 stars

Isaac Vainio is a Libriomancer, a member of the secret organization founded five centuries ago by Johannes Gutenberg. Libriomancers are gifted with the ability to magically reach into books and draw forth objects. When Isaac is attacked by vampires that leaked from the pages of books into our world, he barely manages to escape. To his horror he discovers that vampires have been attacking other magic-users as well, and Gutenberg has been kidnapped.With the help of a motorcycle-riding dryad who packs a pair of oak cudgels, Isaac finds himself hunting the unknown dark power that has been manipulating humans and vampires alike. And his search will uncover dangerous secrets about Libriomancy, Gutenberg, and the history of magic. . . .

I am really amazingly in love with this concept. From the first moment I read the summary I started day-dreaming about what I would pull from my favorite series. Libriomancer is the story about a man thrown into a mystery war like thing that threatens his whole way of life. Isaac was thrown out of field work before even getting the chance to start, so having vampires come after him and claim it was because the Porters (the name of the Libriomancer group founded by Gutenberg)  started it, startles him into a high-stakes adventure. Soon Lena Greenwood shows up to help, and they are off trying to find out what the hell is going on.

The story itself is entertaining and page-turny. There are a lot of twists and turns and everything in the plot makes sense in the world that was created. But the best part for me is the world building. I find myself still getting lost in the concept of actually being a Libriomancer more than the actual story. Isaac and Lena and all the secondary characters are interesting and all that, but I just cant get past the idea of being able to physically connect with a story. I did really love some of the twists and called one of them to an extent. I was so proud I texted my sister. I loved how they talked about different species of vampires that came from different book series, so they have different properties. It is clearly a well defined cannon.

There were some things though that took me out of the story. The one that sticks out is the ending and certain things about certain characters. I was just thrown off I guess. Another thing that through me off, and this is very much a me thing, was I could not visualize the main character. I either kept picturing the author because I am aware of what he looks like from his cover posing series, or I was trying to picture the cover guy. But the cover guy never really stuck because, and this is horrible to say, the characterization of the main character is smart and resilient not athletic and traditional hero-y. My brain for some reason can't jive that this attractive man on the cover, this traditional badass hero, is the same guy I am reading about. It makes no damn sense.

Anyway everything was entertaining and I gobbled the book up. It wasn't a really heavy fantasy series, but that doesn't mean things were not fleshed out. The fantasy in this book is probably of the type that is most accessible to me. I can't wait to continue the series, though I think the next book will differ greatly from this one based on where the last ended.

So if the synopsis sounds good to you and you like fantasy, give this one a go. It's totally worth the time.