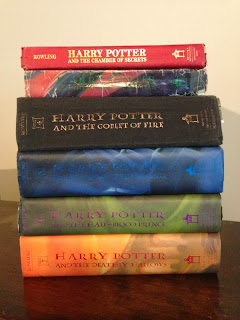 Until this summer I had only read the first Harry Potter book...which I read the previous summer...for the first time. My Harry Potter summer started back in June when Kelly, Kimberly, and I were discussing Code Name Verity for our collaborative post. Not surprisingly after a while we strayed from our book conversation and somehow it came up that I had only read The Sorcerers' Stone. Somehow that turned into me agreeing to read the entire series. And I did. In twelve weeks I read books two through seven AND watched the first three movies.

I enjoyed the series a lot more than I thought I would! I'm not much of a fantasy novel girl and didn't think I'd like the books at all. But I loved the world that JK Rowling created and the cast of characters. She even created a fictional character that I hate with a passion, Dolores Umbridge. I have never hated a fictional character so much. I think Hagrid was my favorite character but I also loved Dobby (even though he was a tad annoying at times).

The wizard world...JK Rowling put SO much thought and effort into that and it shows. I swear she literally thought of everything. One day I'll reread the books and probably discover so many things that I missed the first time around.