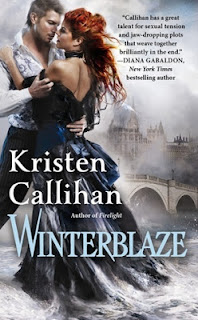 Title/Author: Winterblaze by Kristen Callihan
Publisher/Year Published: February 26th 2013 by Forever Romance
How I got this book: NetGalley in exchange for a fair review
Why I read this book: The third book in a super refreshing paranormal steampunk romance.
Rating: 5 stars

Winterblaze in the third book in The Darkest London series, and I would say is the one takes us the most into the paranormal. Firelight (review) started by gradually introducing us to this mix of paranormal and steampunk Victorian London and introducing us to the Ellis sisters. Moonglow (review) ramped up the paranormal showing us werewolves and GIMs (Ghosts in the Machine… my favorite phrase ever). With Winterblaze we get introduced to even darker sides of this dark London.
Before I even continue, if you have not read the first two books, I don’t think Winterblaze is the place to start. For instance, the conflict that sets up the feelings for the main couple in this book happened in Moonglow. Callihan does a decent job of recapping without seeming to recap, but obviously reading the book would be the best reminder. Besides it is an excellent book.
Let’s look at Winterblaze.
The Story
Winterblaze follows the eldest Ellis sister, Poppy. Poppy has been married to Winston Lane for the series thus far, but being attacked by a werewolf and realizing Poppy has been lying to him about her involvement in the supernatural world causes Winston to leave her, his trust shattered.
The story jumps in right there and just starts off running. Poppy receives a postcard from an old nemesis threatening Winston’s life. So she runs to his side, which happens to be on a ship that I kept picturing as the Titanic for some reason. There we meet Mr. Jones, the demon threatening both Poppy and Winston. There is a revelation that I really don’t want to give away that happens rather soon on that forces Poppy and Winston to get over themselves and join together to solve a mystery.
The story focuses on that mystery as well as Poppy and Winston. Both have to heal from the betrayal of trust they felt. They need to try to learn to be a couple again, each knowing the complete truth. The mystery I thought was pretty good. I figured out one of the twists rather early, but was blindsided by a few others, as seems to be the pattern in Callihan’s books.
The Characters
Winston and Poppy were awesome characters. I think my favorite thing about them is that they did not change from what we already knew and had seen about them in previous books. One of my biggest pet peeves is when secondary characters I have come to adore get their own book and their personality or conflict completely changes from the way I had already built them in my mind. This book is the farthest from that.

Both of our leads are hurt and trying to heal themselves as well as their relationship, all while trying to deal with the mystery that needs to solved. They did not let me down, though sometimes I felt that we spent too much time in their heads, but I didn’t think that enough to have it really affect my enjoyment.
We get to see our past couples for a bit in this, but the main secondary characters are Mary the GIM and Jack Talent the shifter. They are quite a pair of characters and any time they interact you can just feel the sparks! Speaking of sparks…
The Romance
The romance was my favorite part of this. It is completely different than most romance novels because we are not seeing their beginning but somewhere in the middle of their relationship. There are a few flashbacks that show us how they met and all that, but the majority of time is spent with them here in the now and trying to overcome their trust issues. I love the interactions between Poppy and Win. It felt so realistic, like they were old friends going through a problem. I just want to reach in and give them both a big hug.
The sex scenes were pretty awesome and fit well with how our characters were acting. And yay! Loved the sexual tension build up! It just makes the payoff so much better!
The Execution
As I mentioned, this book could not be a standalone nor would I recommend anyone to read it as one. It is written for the series and meant to be read that way. At first the beginning was really overwhelming. There wasn’t a lot of time to reacclimate me to the ways of this world. It had been a while since I read Moonglow, and my initial enjoyment was lessened because of it.
I was jarred by the first flashback as well and thought initially that they would get really distracting, but I actually ended up thinking Callihan did an excellent job of fitting them into the story not only when they made sense but when they mirrored some sort of theme that was happening in the present. And I liked that near the end there is a call back to the flashbacks that was very smart.
The Overview
Overall, I really enjoyed this book and devoured in a few sittings. Callihan is one of my new favorite authors. A definite autobuy. Poppy and Win’s story was heartbreaking and romantic. The novel does not deal in the same time in a relationship that most romance novels do and I think this fact makes it all the stronger. The beginning was a bit confusing, but as soon as I found my footing I was immersed in the world. If you are even the least bit interested in paranormal steampunk, pick this series up. Callihan has created a super inventive world full of amazing new things to explore and discover. I can’t wait to see where she leads us next!

This book was provided for me free for an honest review from NetGalley.
Posted by Julia at 1:00:00 AM