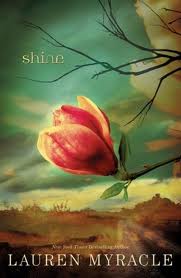 
Cat hasn't spoken to her once best friend, Patrick, in years, ever since an incident that caused her to stop talking to pretty much everyone. But when Patrick, who has not made any efforts to hide his homosexuality in their small Appalachian town, is the victim of a brutal hate crime, Cat thinks she knows who did it. She also knows justice won't be served in Black Creek, and resolves to find the perpetrator at any cost. But as she digs, she's learning much more about her community and the people in it than she thought she would, in addition to having to revisit and start resolving what happened to her three years earlier.
Not for the faint of heart, Myracle gives us a true-to-life and bluntly honest look at life in rural Appalachia. Cat's town of Black Creek is a place of addiction, alcoholism, school drop-outs, and poverty. It's also a place of secrets, ones that most of the people in the small town want kept secret. The characters mostly want to sweep the unseemly parts of their lives swept under the proverbial rug, unless it's really juicy gossip they can share at church. But for those involved or affected, they usually just look the other way.
Cat has looked the other way for too long. After a sexual assault, which two members of her family witnessed and said nothing about, she has learned to block out the rest of the world. But as she tries to help a comatose Patrick, she begins to gain confidence and becomes what one character calls "fierce"—a term she is surprised to find she not only likes, but agrees with.
I loved how Myracle slowly reveals what happened in Cat's past and what is going on in Black Creek. Suspense is ever present, and once the momentum gets going, boy, does it really get going. Twists and turns are everywhere, and I was honestly surprised at how things progressed, though I did guess what happened a while before Cat did.
The foreshadowing is incredibly subtle, and I wondered at some points if it was too subtle, if certain character traits or plot points were so understated that they were underdeveloped. In the end I think they were realistic, making for a more believable story.
Myracle's writing is, as I said earlier, blunt. She does not shy away from domestic abuse, drug addiction, bullying, intolerance, or the results of a severe beating. Her vivid descriptions provide a clear setting and atmosphere for the story being told. She also writes in the vernacular, adding to the authenticity of the story.
The LGBTQ themes in the text are relevant and topical, providing readers with a look at how ugly intolerance and gay bashing can be, especially in a small town.
This is a great page-turner, full of suspense and mystery. Yet it is also a well-done portrait of a poor Appalachian town and community, burdened by deeply buried secrets and the fierce desire to keep them hidden.
Disclosure: I received a copy of this e-book from NetGalley.
Posted by Tahleen at 8:00:00 AM