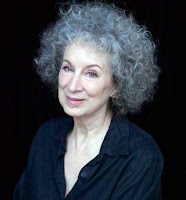 [For those of you who may be unfamiliar with Margaret Atwood, she is a Canadian author, perhaps most famous for her 1985 novel, The Handmaid’s Tale, for which she won the Arthur C. Clarke Award. She has written many other novels, including The Edible Woman, Alias Grace, and The Blind Assassin (for which she received the 2000 Booker Prize), short story collections (one of which, Wilderness Tips, I just read and will be reviewing in a couple weeks), and poetry collections. She is also an environmental activist and is involved in Canadian politics.]
While, like with most book lovers, it is impossible for me to pinpoint my favorite author, Margaret Atwood definitely hovers around that #1 spot. My first introduction to Atwood was my junior year of high school, when I read The Handmaid’s Tale. That book basically blew my mind, and I knew I wanted to read more of her work. Though I unfortunately have not actually gotten to read very many more of her books, I follow her on Twitter, where she is very active, and read her blog posts. One of my favorite things about Atwood is that she is an activist at heart; she stands up for what she believes in, both through her writing and her actions. As an example, a few weeks ago she signed a petition against Fox News expanding into Canada, a signature that was met with a scathing attack from a Canadian newspaper. Instead of hiding from the public or retracting her signature, she upheld her signature and kept her fans updated on everything that was happening and her opinions on it. Despite being very busy flying around the world as part of her book tour for her most recent book, The Year of the Flood (a companion novel to her 2003 Oryx and Crake), she still constantly fights for social justice and the environment, and interacts with those who admire her.
Recently, in fact, Atwood participated in a Goodreads Q&A group, in which fans asked her all sorts of questions about her books (particularly Oryx and Crake, The Year of the Flood, and The Handmaid’s Tale), her writing habits, and writing and literature in general. While much of the discussion would provide many spoilers to someone who hasn’t read the novels, I’ve selected some (spoiler-free) questions and answers that I found pinteresting.
Regarding a question about the abundance of food in her writing:

There are two answers –
1) Literary: As a young person, I was disturbed when the characters in books never got anything to eat, or when they were actually starving or going hungry, as in Oliver Twist and Les Miserables. Also I read a lot of animal stories and food is very important in them. So I try to give my characters something to eat when possible.
2) Real life: I was young during the war when there was rationing; people thought a lot about food, what was scarce, etc. And I spent much of my childhood in the northern bush — we had a garden (no shops nearby) and caught fish, etc. So I have always known where food comes from. I have known about wild foods all my life and have prepared and eaten many. (I raised the money to start PEN Canada by writing a book called “The CanLit Food Book,” which juxtaposes fiction bits and poems about food with recipes by authors - some of whom can’t really cook... There’s a recipe for “toast,” for instance.) In the 70s we lived on a farm and had chickens and other animals and a huge vegetable garden, & did a lot of canning, drying, preserving etc.

On reading fiction out loud:

Some things lend themselves better to oral renditions, and some authors are better than others at reading their own work. But it’s unfair to expect everyone to have all ideal qualities. (I don’t for instance at all like the way Yeats read his own poetry, and kind of wish I’d never heard the recording..) I don’t much like my own reading voice when it’s recorded. I think it’s a curiosity, but that the real “reading” takes place when book meets reader...

On her future books:

I am indeed working on a third book [to go along with Oryx and Crake and The Year of the Flood] -- it is tentatively called MaddAddam and will follow the fortunes of that group of people, including Zeb. But at the same time I am working on the Ellman Lectures, Emory in October, which will then be a book: In Other Worlds: SF and the Human Imagination. It will include some of my other writings on SF (Sci Fi, Spec Fic, S & S/Fantasy, Slipstream Fiction...)

And, finally, one fan asked if she had “any good suggestions where to ride out the impending global pandemic,” as that which occurs in Oryx and Crake and The Year of the Flood, a question to which she provided a serious, and helpful, answer:

I think Toby’s [character in YOF] choice of a spa in a park would be good... But any place where you can seal yourself off from actual contact, with an adequate food supply etc. ... As this one sweeps through very quickly, you wouldn’t have to be cut off for years, just some months...

If you’d like to see Atwood’s other responses, including some interesting answers to specific questions about her novels, you can check out the group here.
You can also visit her blog: http://marg09.wordpress.com/
And twitter: http://twitter.com/#!/MargaretAtwood
Posted by Natanya at 11:53:00 AM