Author: Jane Austen
Published:  Oxford University Press, 2004 (originally 1811)
Where I Got It: The library
Why I Read It: I was reading all of Jane Austen's novels in order of publication 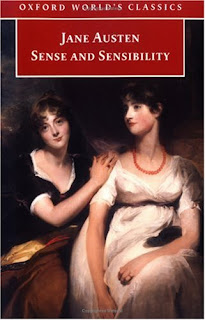 I think that most of us can agree that, yes, Pride & Prejudice is a great novel. The characters and overall plot are memorable and inspiring, yet I feel it greatly overshadows some of Jane Austen's other wonderful books, such as this one.

In Sense & Sensibility, the two main characters are sisters, Elinor and Marianne Dashwood. They live a comfortable, well to do life with their parents. When their father dies, all his property reverts to his son from a previous marriage. The Dashwood women are essentially left homeless and must start a new life living in much more modest means. The story follows the girls in their new home as they meet new friends, encounter dramatic situations, and of course, meet men and fall in love.

The sisters both deal with love and heartbreak simultaneously, although in completely different ways. Elinor is more mature and gentle with her feelings, while Marianne weeps loudly and stomps around for weeks. As a person who identified with Elinor emotionally, I become slightly irritated with Marianne's dramatic ways, but her general youthfulness and fun spirit definitely made up for it in the end (she's barely 17 after all).

*SPOILERS*
The way their respective 'love stories' turned out in the end took me greatly by surprise. Did anyone else feel completely shocked that Marianne married Col. Brandon? I later realized that, duh, this is what the whole story is wrapped around and leads up to, but still. I'd been picturing him as a very old man in my head the whole time, that's probably why it was so odd. Yet the more I think about it, the more I like this couple. Brandon made Marianne finally grow up.
*END SPOILERS*

I felt that this book was much lighter than any of Jane Austen's other works. Many of her common themes show up (death, sickness, betrayal), but not in as much abundance and it is taken in a much less serious mood. The characters have their flaws, but they ultimately end up being endearing. 4 stars for a fun and lighthearted classic read.

If you enjoy movie adaptations of books, I highly recommend the 1995 movie Sense & Sensibility

starring Emma Thompson and Kate Winslet. It is extremely well done and true to the book, as well as being delightfully entertaining. Also, if you are a fan of the Harry Potter movies, you will find a slew of those actors in this movie as well. Professor Snape, Madame Pomfrey, Professor Slughorn, Professor Trelawney and Umbridge all show up! Hugh Laurie also has a small but memorable role. :)