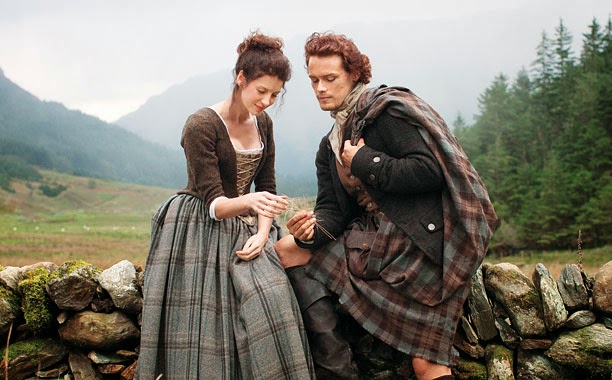 Being in touch with the romance novel community, there was a pretty big shout for joy when Diana Gabaldon's Outlander series was going to be made into a TV series. Some of you may remember from back in 2011 when I reviewed Outlander, that I did not find it that enjoyable. My biggest gripe was with the length of time it took to get to the point and move the story along. So I held out hope that maybe converting this book series into a television show would make the experience better for me. And you know what? It did.

I started off watching Outlander because I was curious. I almost stopped after the second or third episode, but I kept watching. And now I am actually enjoying it more than the book. Is it really just because I couldn't get over the wordiness of Gabaldon's prose? Why was I connecting with pretty much the same story on screen that I couldn't with the books?

Here is my hypothesis. My biggest gripe with the books was the length of time it took to get to any sort of point. The wordiness really didn't even start bothering me until the anti-climatic last 200 pages. Right now in the show we are about 1/4th of the way through (maybe. I honestly don't remember the timeline too much in this book). I think the transfer of this to screen is slowing it down while also getting to the point.

I realize that is kind of an oxymoron. Each episode moves the overall plot along while still feeling like it is taking things slow. I like it. I think that it is helping me connect with the characters and story a lot more.

In addition, I think that at least so far the series is touching on characterization that bothered me in the book regarding Claire. I never believed her struggle with the two men, but in the show I really do. The actress is amazing in her role. That's actually another thing I really enjoy about the show. The acting is outstanding. I am actually more entrenched in the people around them then I am in the love story between Jamie and Claire.

Another thing I think works really well in the show is the dichotomy they show between Claire's life in the 1940s and her life in the 1740s. The flashbacks work so well at framing the story!

I realize that we are only 7 episodes in, and I have yet to get to the part of the book that really turned me off, so I guess I reserve judgement. But overall I have to say that this series is doing a great job of translating book to screen. If people are interested in a time travel romance story set in 18th century Scotland, you should check this out. I think you can actually watch the first episode free on Starz's website.

Has anyone been watching? I am curious to get the opinion of other people who read the book? Were you a fan of the book and do you like or dislike the show? Conversely, I'd love to hear from people who just are watching the show. How are you liking the journey so far?