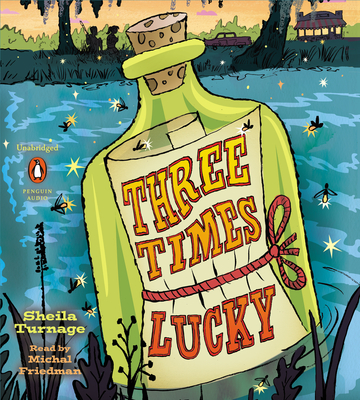 I really liked listening to this audiobook, the print version of which nabbed a Newbery Honor this year. Mo LoBeau, rising sixth grader and our narrator, finds herself and her small NC town of Tupelo Landing in the middle of a murder mystery t
hat ends up being years in the making.

We are first treated to a bit of exposition and an introduction to the small, sleepy town and its residents. Mo and her adoptive family, the Colonel and Miss Lana, run the town cafe. We learn about Mo's history, a baby who was washed away from her "upstream mother" (as she calls her) during a hurricane and rescued by the Colonel, who came to town with a "suitcase full of money" (so they say) and without his memory.

Various other townsfolk wander in and out of the narrative, and they are mostly well-rounded characters at that.

Tupelo Landing itself is a charming setting for such a serious event as a murder, and I felt Turnage handled it all incredibly well. The murder itself is not glossed over for the benefit of the children, and Mo's reaction to the news is very believable, as are everyone else's. Yet Mo's quick tongue and humor are enchanting, lifting the mood considerably despite the danger and ugliness. Abuse, abandonment, and poverty are all major themes, but Turnage's prose is delightful and calming, which balances everything out nicely.

I had trouble with the ending of the novel, which felt abrupt to me. Everything was wrapped up very quickly, and I was surprised when I got to the end as I felt like something was missing. But despite this minor quibble, overall I thought it was a well done piece of writing. Deserving of the Newbery Honor it received? Maybe, maybe not. But definitely deserving of your time.

Michal Friedman does an excellent job narrating. She gave Mo a young girl's voice with spunk and a gentle Southern twang, giving every word and phrase just the right amount of emphasis. Her acting was spot on, and it's very disappointing to hear that she's passed on and will be unable to give her voice to any other characters in the future.

This is a lovely, well-done audiobook that I definitely would recommend to fans of middle-grade fiction, Southern fiction, and mysteries.

Disclosure: I got this audiobook from my public library.
Posted by Tahleen at 2:20:00 PM